Umesha, now nearly four, waddles between the television and a plate of rice from which her mother feeds her. She stands in front of the television watching a group of children sing and dance. Fascinated, she stretches out one of her arms in imitation.

A year ago, Umesha could neither stand, sit, or speak. Ajitha, Umesha’s mother, worried as she watched other children her daughter`s age begin to walk and talk.

But now there are smiles and laughter as Umesha makes funny faces to entertain her mother and Anoma – a volunteer for the Community-Based Rehabilitation project that ChildFund Sri Lanka runs in Puttalam. Children with disabilities are among the most vulnerable of children since they are often hidden by their families, stigmatised by society, and largely unprotected despite existing laws and social safety nets.

Through the CBR project, ChildFund helps caregivers detect and recognise disabilities early and learn how best to manage them. ChildFund also collaborates with local authorities and civil society organisations to include children with disabilities in social services programs and the educational system. Currently, the project reaches 120 children with disabilities in Puttalam. Volunteers visit the children`s homes daily or twice a week to monitor their progress, support caregivers – which includes helping with therapeutic exercises for the children – and ensure that the children receive routine clinic check-ups.

For the first year and a half after Umesha’s birth, her parents took her to the hospital frequently. Endless trips, and hours and weeks spent in hospital beds, made no difference to Umesha’s health – and took a high toll on Ajitha and her husband, who does odd jobs for a living. Ajitha had almost given up hope, when Anoma paid her a visit to encourage Ajitha to bring her daughter to the CBR clinic. 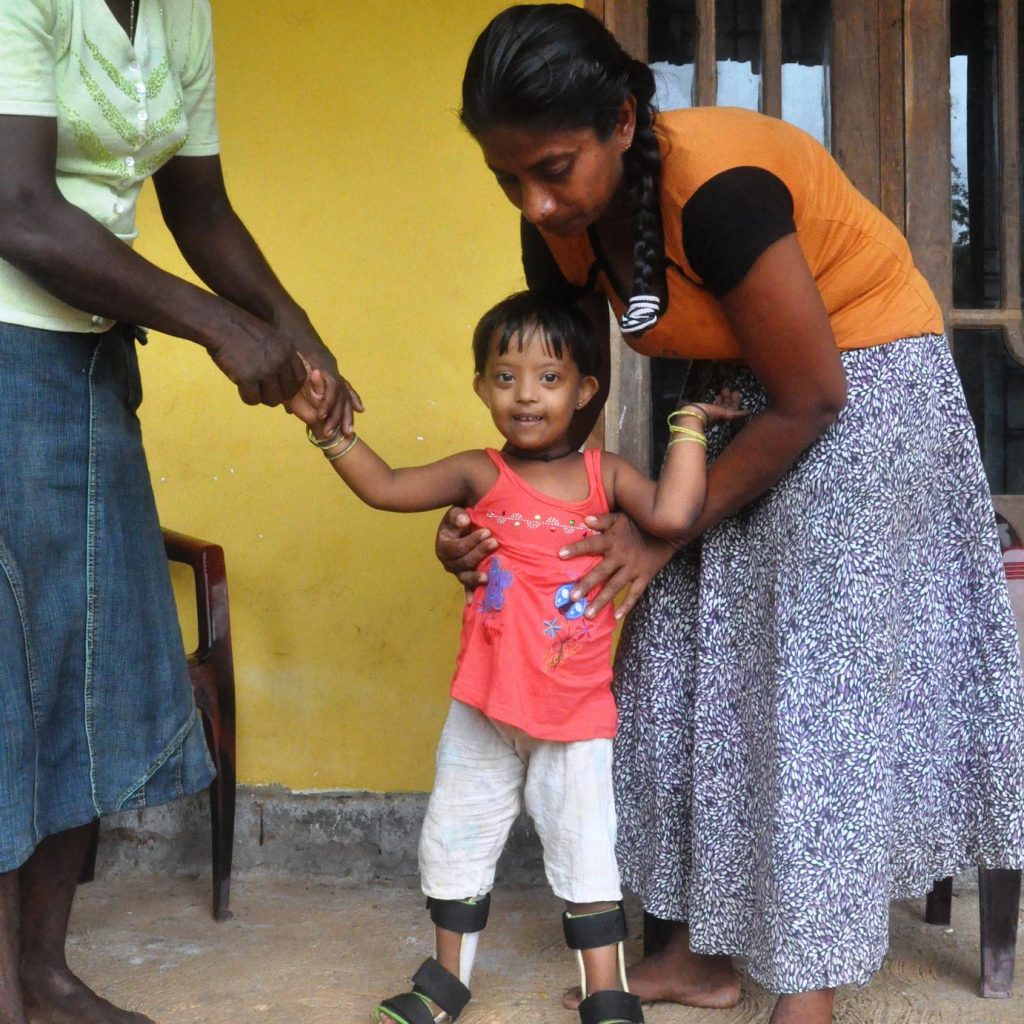 Ajitha says her daughter enjoys the friendly visits and exercise routines, and basks in the attention she receives in regards to the ChildFund-supported CBR program.

They began exercises to strengthen Umesha’s muscles and improve her coordination: “I finally felt that I could begin to hope. I began to think that she would be able to get an education and live a normal life,” said Ajitha. She saw a vast difference in Umesha’s progress.

Even so, Umesha had trouble keeping her feet flat on the ground. So ChildFund helped the family obtain a special pair of shoes that cost US$104. The shoes, made to the clinic doctor’s specifications, help to shape Umesha’s feet, so she will gradually be able to walk normally.

Anoma visits Ajitha’s home at least twice a week to check on Umesha and help with exercises. ChildFund also provides transport for routine visits to the clinic.

“The support has gone a long way toward improving Umesha’s condition,” says Ajitha.

Through the CBR project, ChildFund builds caregivers’ understanding of their children`s disabilities by giving them access to diagnostic services, treatment counselling and government-funded support services. With greater knowledge of their children`s limitations – and possibilities – families can better care for their children and help them to lead fuller, more meaningful lives as active members of their communities.

What Is World Children’s Day and Why Is It Important?