I was in my last semester at the University of Syiah Kuala in Banda Aceh, where I lived in a student dorm on the third floor. That Sunday morning, 26 December 2004, I was watching television when the earthquake happened. Earthquakes were quite common in Aceh, but that one was shaking tremendously. Everyone rushed out of the building.

Then we saw many birds flying above us. I didn’t know what kind of birds they were “it was like a death bird“ so I thought, this is it, this is the end of the world.

To my confusion, I saw people were running and screaming “Water, water!” I didn`t really know what was happening, but I followed everyone. I looked back and saw everything was dark; it was like black water. I ran faster than I normally did, even though I was wearing a sarong. I tried to stop people in cars too, but no one stopped. 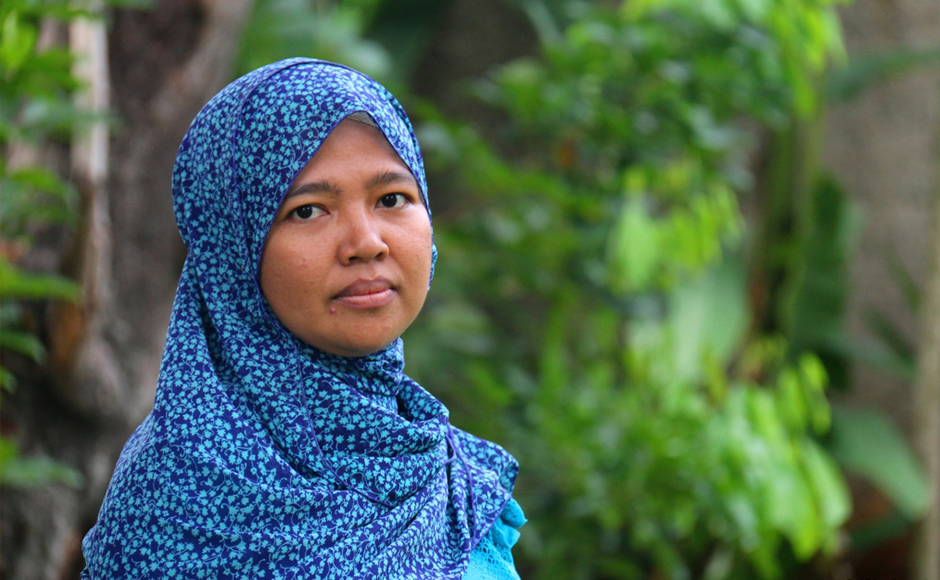 Ayusnita was living in Banda Aceh, one of the hardest-hit regions in Indonesia, when the tsunami made landfall in 2004

I kept running and following people to the campus mosque. I thought if I die, I`ll die in a mosque. Everyone was panicked and screaming. Cars and motorbikes were lurching and honking. I made it to the mosque and went up to the second floor. But the tremors hadn`t stopped, so we kept coming downstairs and back up again every time people shouted “Water, water!”

Soon, people were screaming, “Dead body, dead body!” At the time, I still didn’t understand how huge a disaster this was. Suddenly, many people were carrying dead bodies covered in mud, their clothes torn apart. It happened so fast.

After the flood, we were taken by car to the airport. I had some money and my mobile phone with me, but there was nothing to buy and no cellular networks were on. No stores were open, because they were afraid of looting. One friend of mine sold her jewelry to get a plane ticket, but there were no flights. We just waited at the evacuation camp at the airport. At night, we slept on the road, because we were afraid of the airport would collapse from the earthquake. Soldiers came, providing us with water, rice and noodles.

I stayed in the airport until Monday night, when my friend was picked up by her brother. I went out with them and back to my parents in Medan.

One day, I got hysterical seeing the news on television. Another day, I just cried and screamed. I had nightmares too and didn`t go out for a few months.

Three months after the tsunami, I went back to Aceh to finish my studies. I went to see the dorm; the campus areas were badly damaged. I didn`t see dead bodies anymore, but we still could smell something. It was devastating for everyone.

All of my friends from the dorm were safe. But I lost five friends who didn`t live at the dorm; one of them was really close. She was in her house with her family that day and was swept away by the water. I knew some people who reunited years after the tsunami.

Even though her younger brother told me that he was the only one from his family who survived “because he was not home that day“ sometimes I would hope that I would see her again. Two or three times, I chased someone who I thought looked like her. I called out her name, Amel, but when they turned around, I realised they weren`t her. I have lost my hope.

I stayed in Banda Aceh until 2010 but only had the courage to look for my friend`s house in February 2014. It was really heartbreaking and difficult for me. The area was totally destroyed, but I remembered there was a cellular tower near her house. She used to climb on it to play around. That tower was the only thing left there.

Something stays with me until today. At the campus mosque, I saw a little boy in front of me, about seven or eight years old, who was bleeding from a bad cut. He was crying, but I didn`t ask him anything. I was so confused about what was happening and overwhelmed by seeing so many dead people. I am thinking now maybe I was too selfish at that time for only thinking about myself. Even now, I still have his face in my mind.

I didn`t really know what a tsunami was until it happened in Aceh. Now, when we have an earthquake, I always wonder if there will be a tsunami or not, and where to go. In Banda Aceh, we see many evacuation route signs now, and the infrastructure has improved.

Ayusnita has lived in Jakarta with her family since 2010 and joined ChildFund Indonesia as a human resources officer in October 2014.