Carolyne Nimop is sitting on a wooden bench in the sunshine next to her colleagues Giniat Upagi and Yane Pasen: Carolyn and Yane are both rural magistrates, while Giniat is a Peace Officer.

All have travelled for days to reach Loupom Island, where they are taking part in child protection training – a workshop focused on giving village courts officials the necessary skills to handle child cases in the rural legal system.

“Giniat, Yane and I are from the Wopten One village court,” says Carolyne. “We walked for three days on bush tracks across several mountains before reaching the coastline, and traveled another 45 minutes by boat to Loupom Island to attend this training.”

In total, there are more than 50 court officials from Amazon Bay in Central Province in attendance. The training program is one of six workshops being rolled out in Central Province by ChildFund Papua New Guinea in partnership with the Department of Justice and Attorney General, and has the funding support of the Australian Government through the Australian NGO Cooperation Program (ANCP).

For Sally Beadle, ChildFund’s PNG’s team leader for gender and child protection, the workshops ensure that officials working on the frontline are aware of their roles and responsibilities. She says: “Village courts are a critical partner for promoting internationally established equal rights and protections for women and children at the local level.” 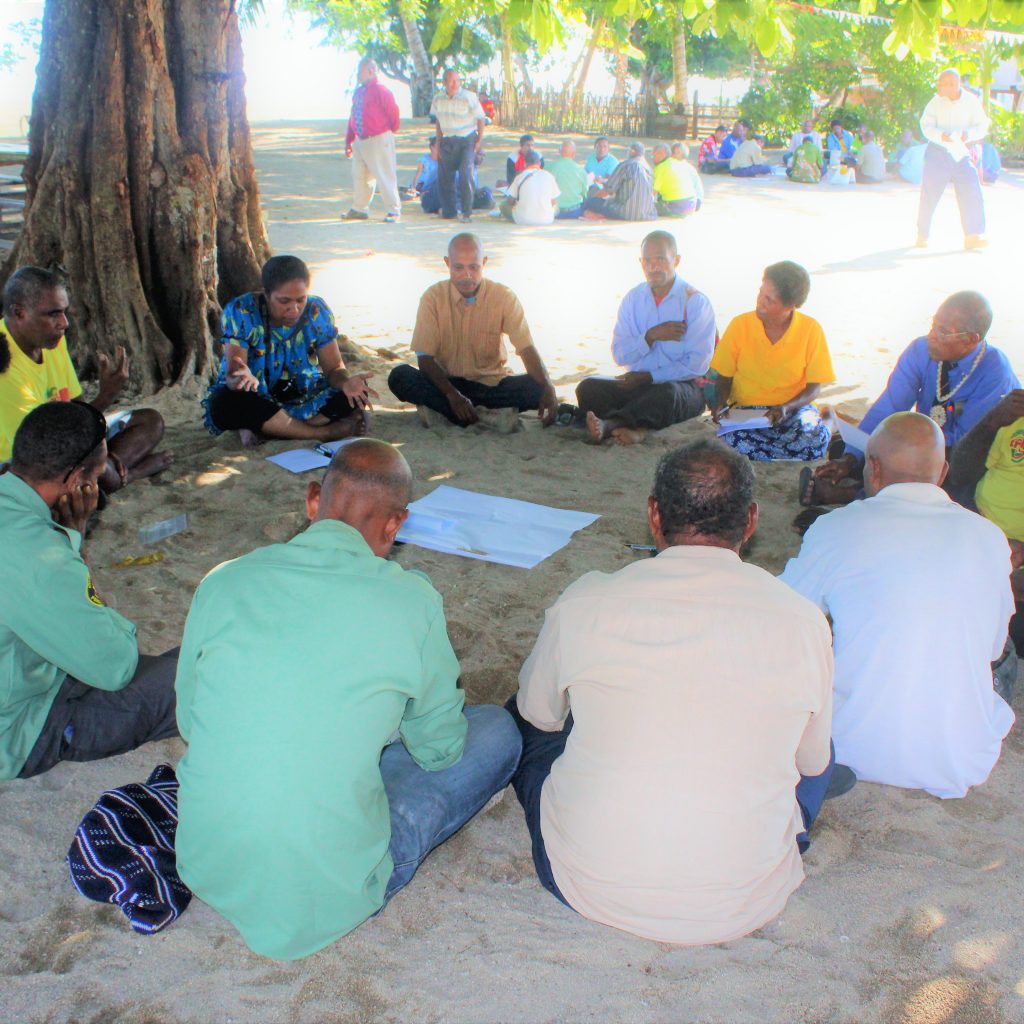 Carolyne (in blue) is a rural magistrate and is taking part in child protection training for the first time.

As the training begins, Carolyne listens eagerly and takes notes, while also explaining and translating the information to Giniat and Yane in their local Daga language. “I am excited as this is my first training after being recently appointed as a magistrate representing Nonou ward,” says Carolyne.

She is not the only one. While many of the participants have served their communities for more than 20 years, this is the first time they have taken part in a workshop focused on child justice. Until now, these officials would have relied on cultural norms and practices when conducting their work, with little understanding of contemporary laws.

Nichodemus Mosoro, deputy secretary of justice administration at the PNG Government’s Department of Justice and Attorney General, notes: “We have these new laws in place, the Family Protection Act, Lukautim Pikinini Act and the Juvenile Justice Act. But like all laws there must be implemented.

“Village court officials play a vital role in rural areas. They know about the cultural practices and norms of that particular locality and are best equipped to deal with the children of that particular locality as well. But they need to be trained on contemporary laws, given the rise in the type of offences that a village courts are dealing with.”

For Giniat, the workshop has provided valuable insights on how to manage child cases in the village court system. He explains: “We have handled many child cases, but we have been applying the same principles and penalties to both children and adults. For instance, if a 16 year old gives birth to a child, she stops going to school as she is no longer considered a child but a mother.

“With this training I have learnt that everyone under the age of 18 is considered a child, and is covered under the Lukautim Pikinini Act. This means her case will be addressed under the Act and she has the right to continue her education and must be cared for as a child.

Participants also learnt the importance of using a child-focused approach when working with young people. Giniat says: “This training has taught us to address children’s issues using a different approach so that they are comfortable around us.”