Closing the gap on immunisations in PNG

Immunisation is considered one of the most successful and cost-effective health interventions in the world. In fact, immunisations prevent two to three million deaths across the world every year from diseases such as diphtheria, tetanus, whooping cough and measles.

Yet, almost 22 million infants worldwide are still missing out on basic vaccines. The focus for World Immunisation Week in 2015 is to close this gap.

Immunising infants against measles has had a huge impact on reducing child deaths. In 2013, almost four out of five children worldwide received one dose of measles vaccine by their first birthday through routine health services, which resulted in a 75 per cent drop in measles deaths between 2000 and 2013. Sadly, even though this safe cost-effective vaccine is available measles remains one of the leading causes of death among young children.

Australia’s closest neighbour, Papua New Guinea (PNG), has one of the lowest vaccination rates in the region, largely due to the remote location of much of its population. It is not uncommon for families to be hours by foot from the nearest hospital so children often go without medical care.

According to the latest Human Development Report, in 2013 only about one in two children in PNG were immunised, down from 58 per cent in 2008. Low immunisation coverage meant an outbreak of measles in October 2013 spread quickly, killing several people and leaving thousands of children and adults at risk in the Pacific Island nation. The outbreak also put people in Australia in danger of the highly infectious disease after it spread to Cairns.

To support the PNG government in delivering vaccinations for children, ChildFund PNG has introduced immunisation patrols and mobile clinics that travel into remote villages with medical staff and supplies to immunise babies and toddlers. With some communities almost unreachable, health workers are often forced to walk through jungle terrain and wade through waist-high rivers to carry out their work. Baby health checks, growth monitoring and malnutrition checks, as well as antenatal care for mothers and family planning services are also included in the patrols.

In the last financial year, with the support of the Australian Government, 2,236 infants and young children were vaccinated through ChildFund-supported immunisation patrols. ChildFund also conducted a campaign to eliminate measles in 100 rural villages in response to the recent outbreak. Tetanus vaccinations for women and girls of child-bearing age are being provided as well, as a precautionary measure, since tetanus is one of the major contributors to the high maternal mortality rate in PNG.

But more needs to be done. “The push to vaccinate more children not only in Australia but throughout our region is vital,” says ChildFund Australia CEO Nigel Spence. “The recent measles outbreak in Papua New Guinea, where only around half of all children are vaccinated, put thousands of children and adults at risk, including people in Australia. It is in our health interests, and the interests of children, to eradicate infectious diseases in our region and beyond.” 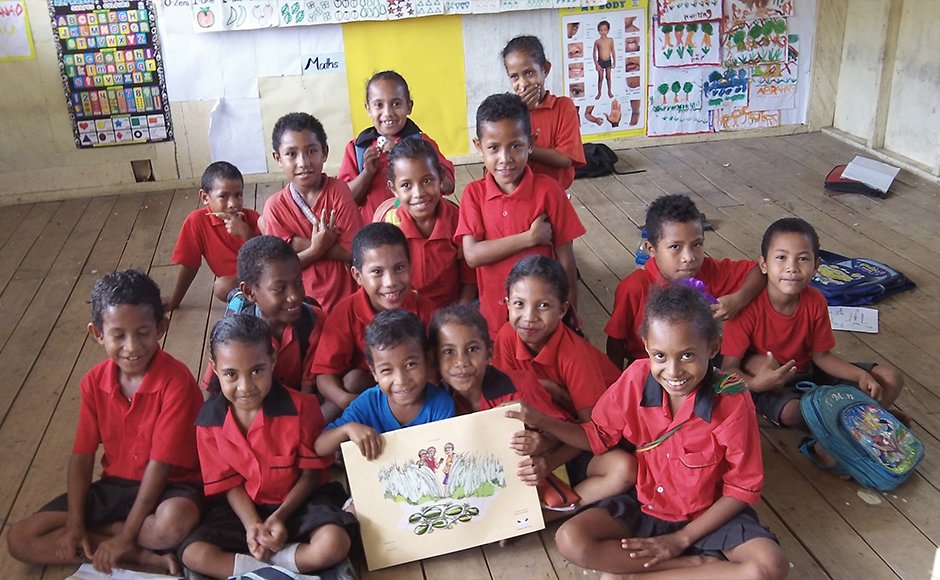 These school children were immunised through a ChildFund PNG campaign to eliminate measles in remote villages.