Contributing to a brighter future in Timor-Leste

Nine-year-old Fernanda’s family lives in a rural village in Manatuto in eastern Timor-Leste. They tend to a garden with corn, long beans, bananas and cassava that feed Fernanda and her four siblings, with just enough left over to sell and make a small income. Now, they have a goat too, which they received earlier this year.

“We don`t have a rice field, as most people do, but only a small plot of land for vegetables,” says Fernando. Fernanda’s father said that they “only do farming in which the production is very low and not enough to sustain family needs. We really wanted to do some other things in order to support family’s income, like buy goats, but we had no money. So we are lucky and happy to receive the goat.”

Fernando’s family is one of 10 families who received a goat this past spring. Fernanda and her siblings enjoy taking care of the 10 goats, which are kept in the same field. “After school I take out the goats, feed and give them a drink and let them eat the grass,” says Fernanda, who wants to become a teacher when she’s older.

“Once our goat has multiplied I will sell some of its offspring to buy my children’s school materials, such as books, pens and uniforms,” says Fernando.

Fernando hopes his children will have a promising future. “I want them to have a good education and later to have a job, so they can have a better life. I will keep supporting them with my own efforts to help them realise their dreams.” 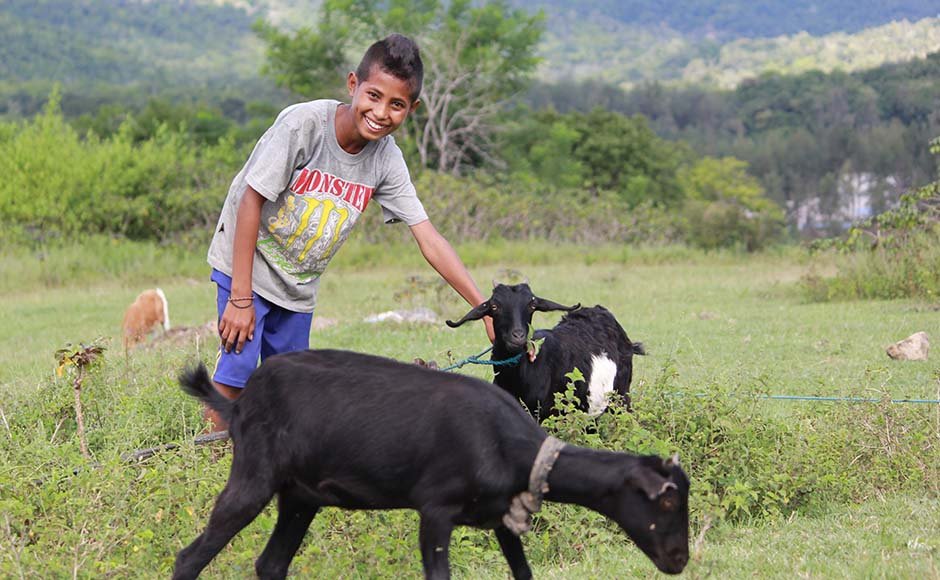 “With respect and happiness, I want to thank the donors who provided us with goats, we will take care of them!”