Only 160km separates the Australian mainland from its closest neighbour Papua New Guinea (PNG), but in many ways the countries are worlds apart.

The far north Queensland region of Cairns has a population of about 162,451 people. The main hospital in Cairns has nine birthing rooms, each with an ensuite, 24-hour obstetric support and a special care nursery.

Three of the rooms in the maternity unit have large baths where mothers can relax during labour or have a water birth. Mothers at Cairns Hospital can choose to have mood music, massage oil, aromatherapy burners, heat packs and a fridge in their room.

More than 2,800 people work in nursing roles in Cairns and the surrounding hospitals. Mothers who give birth in Cairns have access to extensive resources to prepare them for birth, as well as healthcare professionals to guide them through the process.There are about 2,700 births at Cairns Hospital each year or about seven a day.

Just an hour away by plane in Port Moresby, the capital of PNG, the conditions could not be more different. 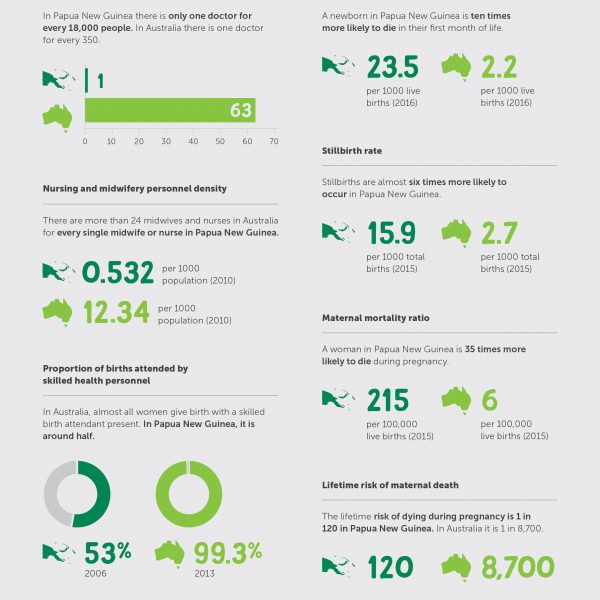 Dozens of babies are born each day in Port Moresby General Hospital’s 24-bed labour ward. The ward is crowded, and patient turnover is high. The hospital struggles to keep up with the demand of a growing population, and there is a critical need for more doctors, nurses and midwives across the country.

In the labour ward of Port Moresby General, there are three full-time doctors, one resident and two registrars. During every eight-hour shift there are at least three midwives, sometimes as many as six. This small team is responsible for the births of about 15,000 babies each year, or about 41 babies a day.

Despite these challenges, Port Moresby General Hospital is better resourced than the facilities in PNG’s regional areas, where 85 per cent of the population live.

Rural health clinics, where they exist, are rudimentary, lack basic equipment and medicines, and must service the vast health needs of impoverished communities.

Because of this lack of health infrastructure, as many as 80% of women in some regions of PNG will give birth at home, compared to less than 1% in Australia.

Tragically, with access to proper healthcare, the majority of these deaths could be prevented.