Has 25 years of child rights made any difference?

Twenty-five years ago, I was working as a child protection social worker in western Sydney. In those days I was doing a lot of support work with families who were doing it tough – large families, poor families, often where parents were dealing with drug and alcohol issues or mental illness, and where there were serious concerns for the safety and wellbeing of children.

In that same year – 1989 – two events occurred that would have a significant impact in different ways: the United Nations adopted the Convention on the Rights of the Child (CRC) and my first son was born.

This was a time when the end of the Cold War brought optimism of a more peaceful world and greater investment in human development. The CRC was transformative in defining children as citizens with human rights and setting out internationally and legally recognised standards on how children should be treated. It placed obligations on governments to uphold children’s rights to survival, development, protection and participation.

The CRC also affirmed that children are to be valued as children, not only for the economic and social contributions they will make as adults. It encouraged us to listen to children on matters concerning them. This had a huge impact on Australian child protection work in the 1980s and 1990s, particularly in giving children a distinct and independent voice in legal proceedings and in decisions affecting their lives.

Certainly for my son, growing up in Australia has meant he`s enjoyed access to high quality primary, secondary and tertiary education, good health care and lived without fear of war, armed conflict or forced displacement. Contrast this with a father I met recently in Papua New Guinea (Max, pictured with Nigel below) whose baby daughter died days earlier from diarrhoea-related illness – 25 years of opportunity compared to 28 weeks of hardship.

What has the CRC achieved in the face of such disparity? Are children today better off than those born in 1989? 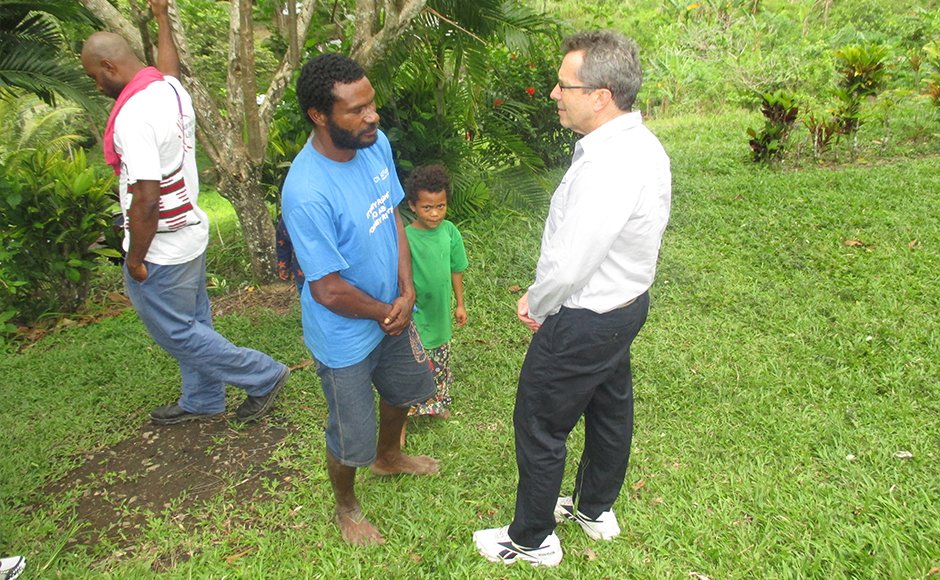 The evidence is strong that children globally now have far better life chances and opportunities. Children born today are half as likely to be part of a family in extreme poverty than in 1990. Children’s health prospects are vastly improved and their chances of surviving the hazardous early years have doubled. They have greater access to clean water, better nutrition and free primary education.

The CRC has been instrumental in prioritising children within the global development agenda. International agreements such as the Millennium Development Goals and the World Fit for Children Plan have required governments to develop plans and report progress on poverty reduction and advancement of children’s rights. As a result, in most countries, the CRC has influenced development of laws, policies and programs to protect children and provide essential services such as health and education.

Children are now commonly involved in the design and implementation of overseas aid projects. ChildFund projects see children in Cambodia participating as stakeholders in local government planning processes, teenagers in Zambia addressing the parliament on harmful traditional practices and children in Laos monitoring water and sanitation projects, as well as a flourishing of children’s clubs, youth groups and sport for development initiatives.

As positive as all this is, 25 years of children’s rights is also a story of under-achievement and failures to protect. Despite significant improvements, six million children under five still die each year, most from preventable causes. Abuse and exploitation of children continues at alarming levels. Almost one in two children experience physical violence before the age of eight and an estimated 85 million children are involved in hazardous child labour.

Progress is unequal. A girl born in Afghanistan today has the odds stacked against her in much the same way as did her mother and grandmother. Illiteracy for boys and girls in remote PNG has barely changed in a generation and early marriage of teenage girls in the mountains of Laos and Myanmar continues much as it always has.

Kofi Annan declared in 2002 that the first decade of action had been a period of great promises and modest achievements for the world`s children: “The world has fallen short of achieving most of the goals of the World Summit for Children, not because they were too ambitious or unaffordable nor because they were technically beyond reach. We have fallen short largely because the needed investments for children were not made.”

The same could be said today. While advances have been made, the data for children 25 years on paints a picture of goals unmet and of unfairness – where a child’s place of birth, gender and ethnic status heavily affect their life opportunities. Until my own children and others like baby Grace in PNG have an equal chance in life, the work of realising children`s rights is not done.

20 November marks the 25th anniversary of the UN Convention on the Rights of the Child. Watch our video here.