Hien and her family live in Ngoc Dong commune, a remote mountainous area of Cao Bang province in northern Vietnam.

In the past, her husband, Chuyen, was forced to take seasonal work and stay away from home for three months at a time. Yet, his salary combined with their farming income still did not cover their daily living costs. If their crop failed, they did not have enough food for the family for several months.

After paying back the loan, she continued to invest in rearing pigs, starting by buying a mother pig. Their mother pig now has had three litters, each with ten piglets.

Hien’s business is profitable and not only covers their living expenses but also their daughter`s school fees. At the moment, they have one mother pig and ten piglets!

ChildFund’s Credit and Savings scheme in Ngoc Dong commune was established in partnership with the commune’s Women’s Union in March 2011. Now the group boasts more than 300 members with each member contributing 10,000 Vietnamese Dong ($0.50) each month to its credit savings account.

“With the support of the project, our life is becoming much better. Now we have enough food to feed the whole family,” says Hien.

To ensure the success of her new business and to increase the income from their farm, Hien participated in ChildFund’s training sessions on farming rice, maize and animal husbandry and now uses new feeding techniques for her pigs. Instead of the traditional way which took hours to cook food for pigs, Hien now provides the pigs with uncooked food which is just as nutritious. “The new method saves time and money. The pigs grow quickly and look much better rather than raising on cooked food. Then, it`s easier for us to sell them,” she says.

Hien and her family live in an area where stilt houses are common and pigs and chickens roam around the yards. Though she now understands that this is not hygienic for her family so instead of keeping the animals under the house floor, she keeps her chickens and pigs in separate areas. 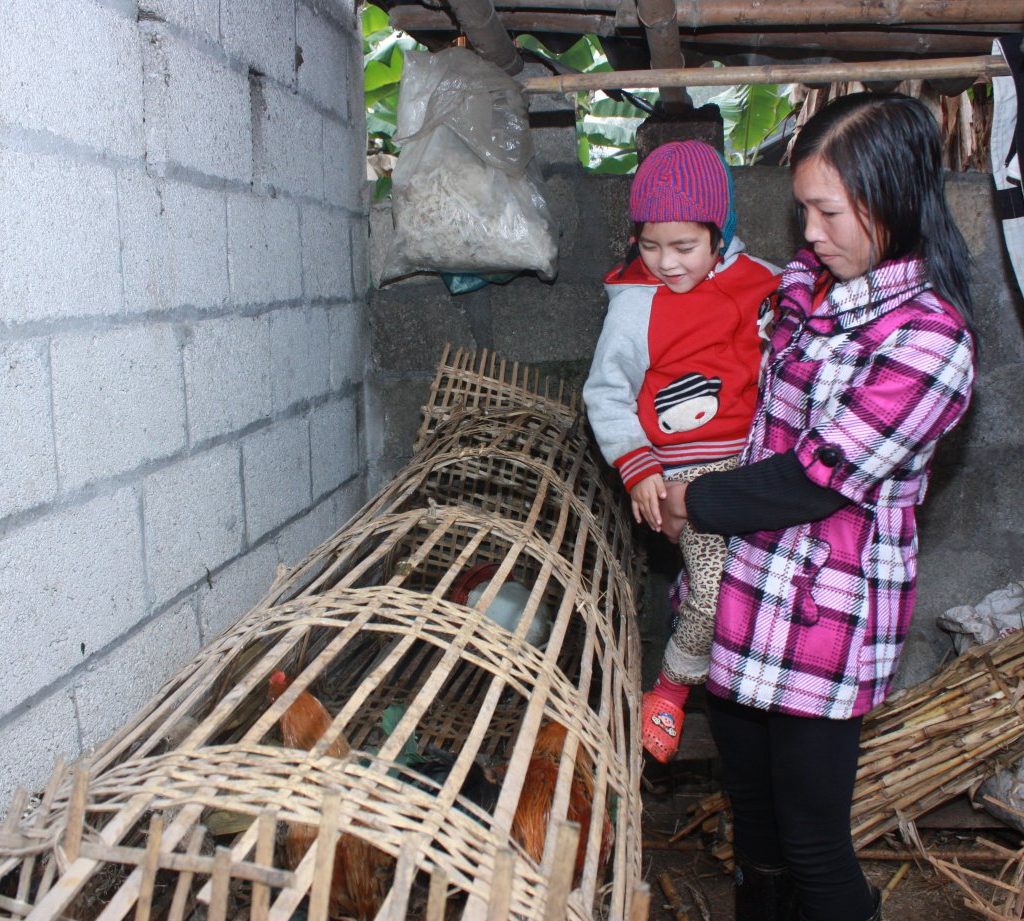 “I feel so lucky that our pigs do not get diseases. Thanks to the knowledge I have gained from the training course, I get them vaccinated periodically,” smiles Hien.

Hien’s husband, Chuyen, also no longer is forced to work far from home. He now earns an income as a builder and when he doesn’t have a construction project, helps his wife raise their pigs.

With the ChildFund agricultural training and access to the Credit and Savings scheme, Hien and her husband now produce enough food for their family and manage to save some money every month to plan for their future.

“I am very grateful to ChildFund for giving me the skills and opportunity to earn a higher income. I hope that we, the commune’s Women’s Union, will continue to increase our Credit and Savings fund. Each member can now borrow more money to invest in small business opportunities.

“I want to try new things and one day I even dream of buying buffaloes!” She says, flashing her big smile.