I am afraid of tomorrow because I have nothing

Kefyalech, a 30-year-old mother who lives in Ethiopia, stays home to care for her six children while her husband, Derara, seeks work. But Derara often comes home without having found a job, because the coffee crop is suffering just like all the others in the two-year rainfall shortage that has gripped Ethiopia for months now, so the family remains hungry.

Three years ago, Kefyalech worked as a daily labourer and earned 10 birr (around 70 cents) a day, which covered some of the family’s expenses. But these days, Kefyalech and her children wait each night to see if Derara has earned enough money to buy maize flour, the only food they can afford.

Kefyalech’s family is not alone. Poor rainfall over two growing seasons has limited the amount farmers can harvest, and El Nino is delaying the rainfall now. The drought is challenging Ethiopia’s agriculture-based economy and has reduced its food supply.

The Ethiopian government estimates more than 10 million people will need food assistance in 2016, more than half of whom are children.

Working with the Ethiopian government, ChildFund Ethiopia and its local partner organisations in seven districts have been providing supplementary food and edible oil for 74,000 most vulnerable children and family members over the past three months. ChildFund’s local partners are also supporting the government to provide blankets, sheets and mattresses to help health centres handle the growing demand as more and more children need treatment. 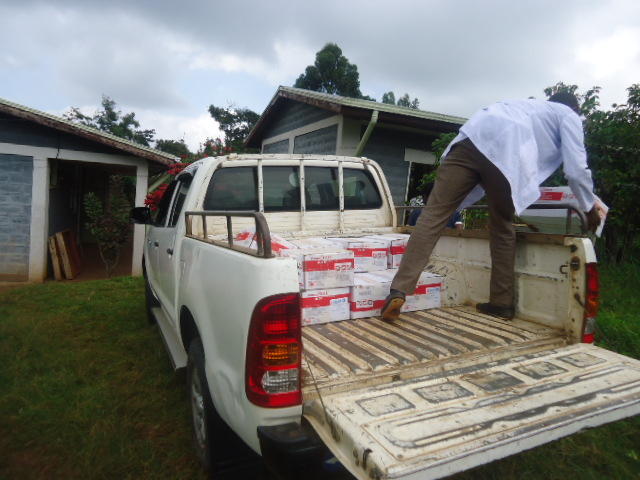 Loading up boxes of Ready to Use Therapeutic Food for distribution to families in drought-affected villages.

At the health centre in Kefyalech’s community, her youngest child, 3-year-old daughter Debritu, was found to be moderately malnourished at a recent nutrition screening, so the supplementary food provided by ChildFund – Famix, a maize-and-soybean mixture fortified with vitamins and minerals – was especially welcome.

But Kefyalech says she felt she could not give the extra food to just Debritu and deprive her other children.

“As a mother, I had no choice but to feed the whole family because there has not been enough food in the house,” she says. “I could not feed the supplementary food to only one of my children while seeing the rest going to sleep on an empty stomach.”

As a result, the supplement was gone early, and Debritu remains malnourished.

The little girl also came down with pneumonia recently – no surprise, as malnutrition undermines children’s immunities. She is improving, with the help of medication she received from the health centre.

Kefyalech is deeply concerned about her family’s fragile future.

“I’m afraid of tomorrow because I have nothing,” she says. “I’m worried for my daughter. I’m scared. What if I don’t get support from ChildFund? I don’t know what is waiting for me tomorrow.”