I am not afraid anymore

Laos is the most bombed country per capita in the world. More than 270 million cluster munitions were dropped on Laos during the Vietnam War. Yet 30 per cent of all bombs failed to detonate and remain live today. Every year, unexploded bombs (UXOs) in Laos still claim dozes of lives, many of whom are children.

“I find new bombs in this land every year. I am afraid young children who don’t know the danger [of the UXOs] will dig the land and touch them when playing in the fields. I am also afraid when slashing the fields because bombs can be everywhere,” says Mai, a resident of a small rural village in Nonghet. The mother-of-two has been working on her plot of land for more than 20 years despite the threat of UXOs.

ChildFund Laos has been working in Nonghet district in rural northern Laos since 2010. Due to the district’s close proximity to the Vietnamese border, it was heavily bombed during the war. It is this presence of UXOs that has slowed development in Nonghet. Before new schools can be built, wells dug or potentially good farming land used, land must be cleared of bombs.

For Mai’s village the scars of a UXO accident remain fresh. Two children were killed and three others from the same family severely injured whilst farming their plot of land – the main livelihood of families in the village.

Twelve-year-old No, who lives in the same village and helps her parents grow corn on their land, says: “I used to see bombs when using a shovel to dig the land. I can’t remember how many times. I feel afraid because there are many bombs and it is not safe. I am afraid for my family when they work in the fields.” 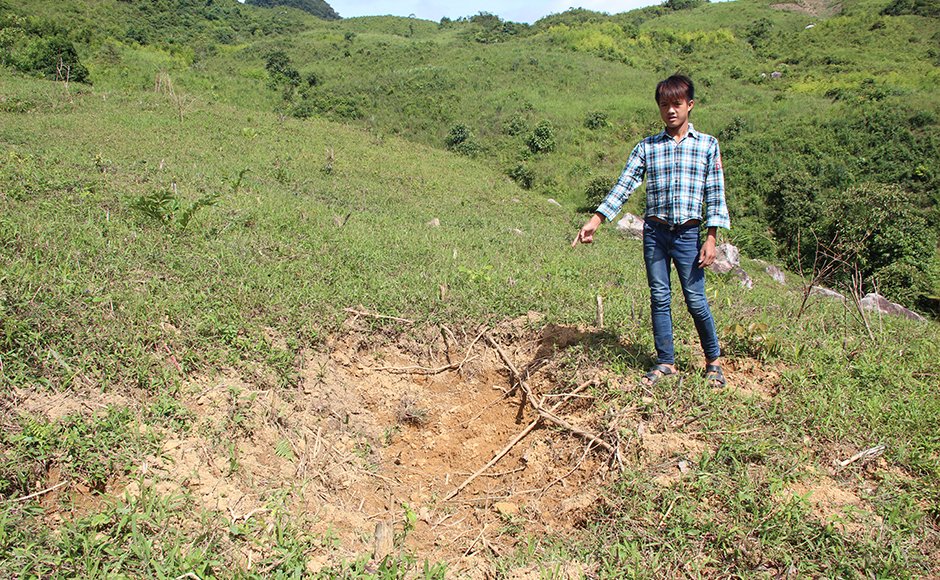 14-year-old Khamson pointing to a bomb crater after his family’s land was cleared.

In 2014, ChildFund Laos supported the clearance of 48,267 m2 of farming land in Mai’s village thanks to the support of generous Australians who donated to our Clear Bombs Laos appeal, and the Australian Government. Sixteen cluster munitions – the main form of UXOs in Laos – were found and removed.

Now, families have access to more available farming land and no longer have to worry about the risk of unexploded bombs each day they work. Fourteen-year-old Khamson is relieved his parents’ land has been cleared of bombs.

“My parents started to work on this land before I was born. They plant rice, plums, peaches and chestnuts. I’ve seen two or three bombs there,” he says. “I feel happy that ChildFund supported our village to clear the bombs.”

Mai says: “I am not afraid anymore because the land has been cleared and is safe. I feel happy because we will harvest our produce without risks.”

ChildFund Australia would like to thank all those who donated to this appeal. Over $54,000 was raised to support families in rural northern Laos. More bomb clearance work will soon be undertaken with the rest of these funds.

UPDATE Nov 2015: The biggest bomb we’ve found so far in one of the villages where we work in Laos was uncovered this month – 1 metre deep in a corn field, only 100 metres from the main road. Another 15 smaller ‘bombies’ (cluster munitions) were also found and destroyed.