I see the impact of sponsorship in Raphael

In 1995, when teacher Michael Coorey took on the role as house master at Bankstown Grammar School (now called Georges River Grammar) in Sydney’s West,  he knew he wanted to do something different for his students. After consulting with other teachers and his students, they decided to sponsor a child through ChildFund Australia.

“I organised the sponsorship on behalf of around 60 students. I collected about 50 cents from each of them every month,” says Michael. “I kept emphasising the fact that our small contribution would only change our world a little but it could change a child’s life in a big way.”

That child was Raphael from northern Uganda. He was 12 years old when he was sponsored by Michael and his students. Life was very difficult for Raphael and his family. In Uganda, the civil war was raging and Raphael was living with his parents and siblings in an internally displaced person’s camp to escape the rebel army led by Joseph Kony.

“Life was simply so challenging before I was sponsored. I am one of 15 children. My father made just $50 a month to support us, so it was very hard for my family to secure school fees for us all. It was compounded by the war we had for 23 years. When I was introduced to ChildFund it was a turning point in my life,” says a now 33-year-old Raphael.

Raphael describes the feeling of being sponsored as a sense of security. It meant he could stay in school and gave him the opportunity to succeed in his life.

“Sponsorship was a dramatic change in the equation. It meant I could stay in school. So I could shift my thoughts from worrying about fees to focusing on myself and my studies,” he says. “For me, sponsorship was like a bridge – if that bridge had not been there I would not have been able to get to the other side.”

Raphael, Michael and his students often conversed. Michael says: “They [his students] could feel a connection to him through his letters, which they loved to read. He often drew pictures of the houses and his surroundings. We got a feel for what life was like there.”

For Raphael, the letters made him feel like he had friends on the other side of the world looking out for him: “I felt so much encouragement to achieve. It made me feel like someone was making sure I do well.” 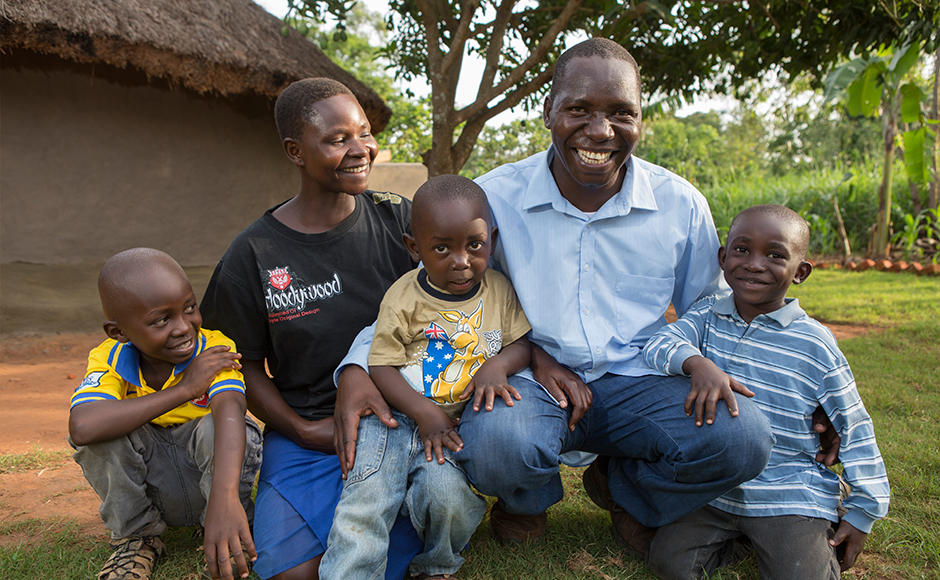 Raphael with his wife and sons.

Raphael is now a grown man with a family of his own. His wife, Beatrice, is a teacher with whom he has three sons – Jonathan, 8, Arron, 6, and Emmanuel, 4. Raphael has completed an undergraduate degree, recently finished postgraduate studies at university and is now working in logistics for a Dutch aid agency.

The future looks bright for this young family. “My children are able to go to one of the best schools in the district. This is a direct impact from my sponsorship,” says Raphael “The ripples are getting larger and larger.”

But Raphael isn’t stopping there – he is now part of ChildFund Uganda’s alumni association which is reaching out to the next generation of children. “If my life had not been helped I would not be here today, so I need to take it personally and reach out to other children.”

“Sponsorship is having a bigger impact than most people, I think, can ever imagine,” says Michael. “It is not just a transaction. It’s a long-term commitment to improving a child’s life. There is a real person with a real life at the other end.”

After the pair reconnected in 2014, Michael had the opportunity to see this impact in person when Raphael made the long journey from Uganda to Sydney to meet him earlier this year. In amongst fun trips to the Opera House (which Raphael has aptly renamed the Opira House, after his surname) and Bondi Beach, the companions made the trip back to where it all started – Georges Grammar School.

“In full academic gown, Raphael proudly spoke to the school and thanked them. He wanted to show the value of education,” says Michael. “He then presented the school and me with certificates of appreciation. It was a great day.”

Michael and Raphael’s friendship continues to grow. Michael is currently fundraising to build a well in Raphael’s community so families will no longer be forced to walk long distances to fetch water. He is also planning to visit Uganda for the first time soon. In the meantime they talk often on the phone.

“It’s just like a stone has dropped into a lake and there’s a ripple effect,” Michael says “Sponsorship was the stone for Raphael but the ripple effect continues and I don’t think it’s going to stop now.”

You can read and watch Raphael’s story in his own words, here.