I will never forget Kay telling her story

Earlier this year, I travelled to Papua New Guinea to document the stories of women and children affected by violence. During this journey I spoke to many incredible women who are standing up for themselves and their children. Women in Papua New Guinea are mobilising, they are protesting and on an individual level many women risk their lives to leave violent relationships.

Most of the women I spoke to who were suffering from family violence had small children. I spoke to many women who gently swung their babies in a billum. It is mesmerising to watch, it looks so blissful. It is so peaceful, so secure, so serene. It`s horrifying to think of how many children witness and are subjected to violence.

In Port Moresby, we spent time at City Mission Haus Ruth, one of the few women`s shelters in the country. All of the women I met at Haus Ruth had tried valiantly to protect their children from violence. They all talked about the horrific violence perpetrated against them, though most of their tears flowed when they spoke of the impact of violence against their little ones.

I will never forget Kay telling her story. She looked straight at the video camera and told of the most horrific attacks on her and her little girl. Whilst she was telling her story I was sitting at her feet, touching her legs and giving her support. I could see the stab marks on her feet.

Kay is living a nightmare. She is a young mother, just trying to look after her sweet little children. Both times that I visited Kay, she had done her daughter’s hair and sat patiently with both her children. I think of Kay often.

On our last day, our team was about to leave the refuge, when we were stopped because a violent and angry husband was outside in the street screaming. The guards who sit below the refuge locked the security gates and called the police. So we waited like all the women at Haus Ruth until it was safe to leave. It was a poignant afternoon.

Kay is telling her story because she hopes people will hear it and take action.

WARNING: THIS VIDEO MAY UPSET SOME VIEWERS 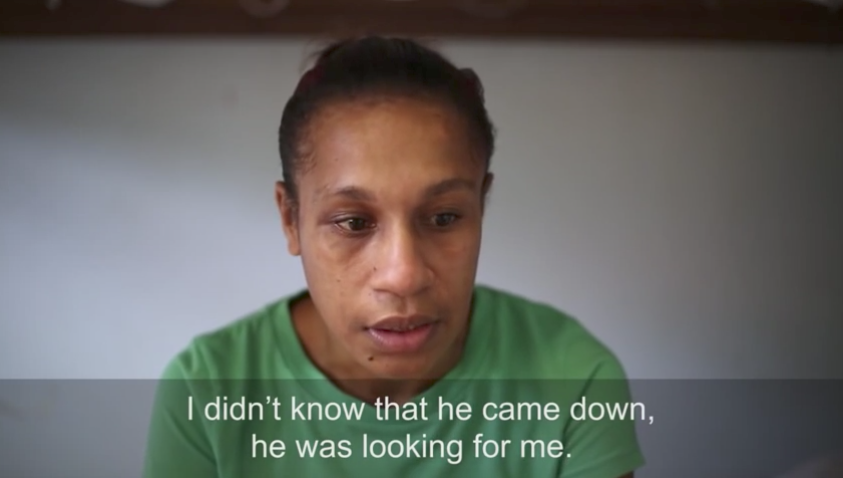 Kay escaped horrific violence but her life is still in danger.

25 November is the International Day for the Elimination of Violence Against Women. ChildFund Australia has joined with World Vision and the Australian National Committee for UN Women to call on Australians not to sit silently as women in nearby countries experience horrific violence and give what they can to support aid agencies who are addressing this problem.