I became a ChildFund Australia sponsor when I was just 19 years old after landing my first proper job – that was 26 years ago. For me, I have never been sure about having children so I decided that I wanted to sponsor a child who may not have the same opportunities we have here in Australia. As the years have progressed, I have had many different sponsored children from various countries through ChildFund.

I started sponsoring Emmanuel from Mexico seven years ago, after a trip to South America inspired me to sponsor a child from South or Central America. Ever since then I have wanted to visit him and the country, so when the opportunity came up this year for me to go to Mexico, I knew I had to make the trip to meet Emmanuel.

On the day of the visit, my friend and I were picked up by our interpreter and her husband and taken to the community, which was about an hour`s drive away. When we arrived at the project office we found out that ChildFund had been working in the area for 15 years but I was their first sponsor to ever visit! It dawned on me that my visit was a big deal not only for myself, Emmanuel and his family but also for the local ChildFund staff.

Emmanuel, his mother and father, the project director, all of his staff, and the interpreter were all at the local office. We had an entourage of about 10 people! It was such a lovely introduction – they were all so eager to meet me.

After meeting at the project office we all went out for lunch and wandered around the town where we bought ice cream in the main square. The day we visited was actually Mother’s Day, which is a big public holiday in Mexico – I think this made the day even more special as everyone in the town was in such good spirits. We bought Emmanuel’s mum a lovely big bunch of flowers to celebrate the day.

At first everyone was nervous, especially since they had never seen a ‘white’ person in real life before! Although everyone relaxed rather quickly when they realised that my friend and I were laid-back and loved to laugh. I told Emmanuel and his parents that they could ask me anything and boy, did they have a lot of questions! They asked me many questions about Australia and my life here: how do we live? Where do we live? Did I have a job? What is my family like? What do I enjoy doing?

Emmanuel’s mother was particularly interested in what foods we eat here, especially after we brought out a packet of ginger nut biscuits which everyone wolfed down. So I am putting together an Aussie cookbook for her, with all the classic Australian recipes such as lamingtons! We just talked and talked and talked, it was lovely to learn from one another. We realised that even though there are many differences between our lives, there are also a lot of similarities. 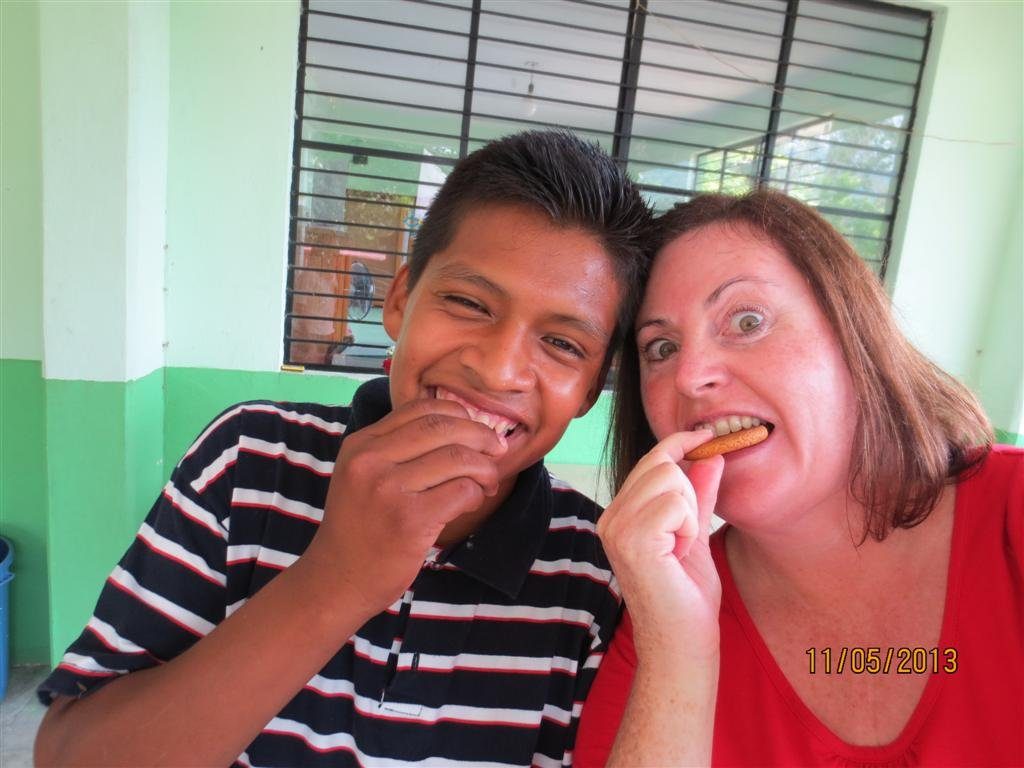 Emmanuel’s father took the day off work to meet me even though that meant he wouldn’t have been paid for that day. He was a quiet man who didn’t speak much until right at the end of the day when he came up to me and thanked me for sponsoring Emmanuel. He was very appreciative that his son would have the opportunity to finish his education and that he wouldn’t have to go and work in the fields like most other kids his age. That is something I will never forget.

My visit was also really important to the local project staff. They had been hoping that a sponsor would visit for such a long time so the children could meet them and learn about them. I hope it does happen again because it was really uplifting for them. They were so excited to be able to show me all the work that has been done in their community and what has been achieved for children living there.

The highlight of the day for me though was meeting Emmanuel and his mother and father. They told me that they often say a prayer for their godmother (which is what they call me), thank me and wonder what I am doing. This really surprised me. I always assumed that Emmanuel knew he had a sponsor but that it wasn`t something that he really thought about, so to hear that he does think and wonder about me really moved me.

This visit really put things into perspective for me – to think that such a small amount of money can go such a long way in the lives of children and their families living in poverty is amazing. If sponsorship can take them in even a slightly different direction in life, then that is what it is all about. To me, it doesn’t get much better than that.