Inside the Rohingya refugee camps in Bangladesh

Fifteen-year-old Normeen and her mother Mahfuza remember the fear and intense heat as the first flames began engulfing the inside of their home.

They were in shock when they realised the house, which their family had built less than a year ago, had been set on fire.

“We saw the flames with our own eyes,” Normeen says.

“They set one side of the house alight and then we realised what had happened we ran out of the other side.”

Through the thick smoke that billowed out of the blazing house and the sound of gunfire, Normeen, Mahfuza, who was heavily pregnant, and her five other children ran as fast as they could, leaving their home and belongings behind.

Like the hundreds of thousands of Rohingya before them, Normeen and Mahfuza and their family began a terrifying journey towards neighbouring Bangladesh, to seek refuge from the violence and civil conflict in Myanmar.

More than 688,000 Rohingya refugees have fled Myanmar’s Rakhine state since August 2017, and are now living in Cox’s Bazar, a fishing port in south Bangladesh.

Over the past six months, ChildFund has worked with partners in Bangladesh to provide emergency services and needs to more than 60,000 people, including Normeen and Mahfuza’s family, who have sought refuge in a “mega camp” in Cox’s Bazar. 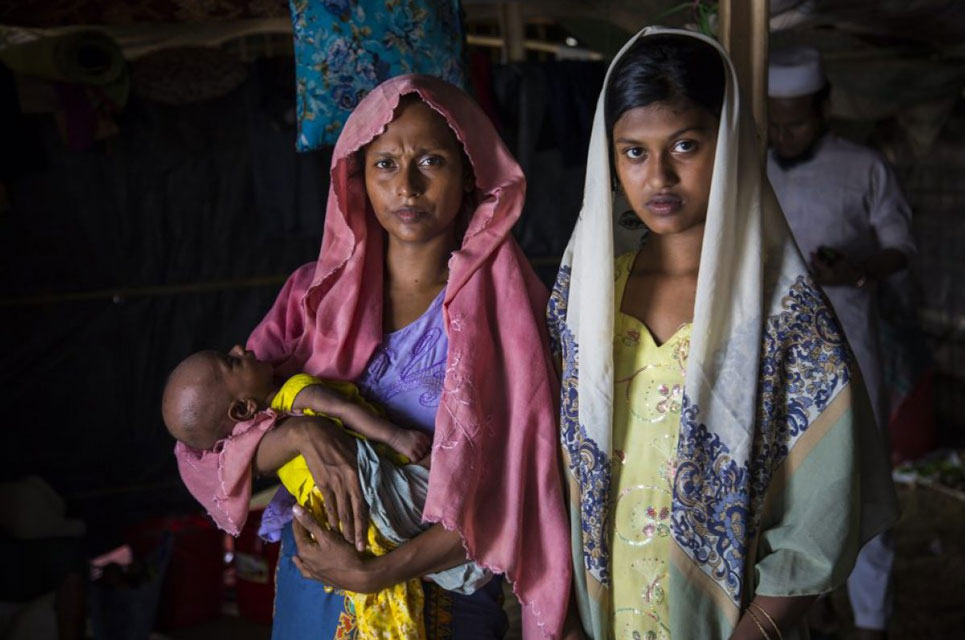 Mahfuza, 32, and her newborn son Salman, and daughter Normeen, 15, are among the hundreds of thousands of refugees who have sought refuge in Bangladesh.

Donations to the Rohingya Refugee Crisis appeal are helping ensure families arriving at the camps have emergency food, clean drinking water, shelter and medicine. Hygiene kits have also been distributed to prevent the spread of waterborne diseases.

The crisis has been particularly devastating for the most vulnerable people in the Rohingya community, including women and children.

Two days after fleeing Myanmar, Mahfuza went into a traumatic labour. She gave birth to her seventh child – a little boy whom she named Salman – on the muddy floor of an abandoned house.

“I was really worried for my newborn son,” Mahfuza says. “I was scared we would get attacked and he might get killed.”

For Normeen, blood stained her clothes for five days during her period as she trudged through muddy terrain and rivers.

“I had nothing to use … we couldn’t bring anything,” Normeen says. “I was scared and ashamed.

“We are not used to being seen by men.”

When the family arrived at the makeshift refugee camps, hungry and exhausted, after seven days on the run, they received emergency food, water and hygiene kits containing sanitary protection, soap, clean underwear and disinfectant.

ChildFund and local partners are also now building emergency latrines within the camps, and safe spaces for women and girls where they can access emotional support from the trauma of their journey from Myanmar, as well as receive medical referrals for rape and gender based violence.

When Bangladesh opened its borders to the desperate people pouring in from Myanmar, no one predicted the scale of the crisis to come.

The influx of refugees that began in August has brought the total Rohingya population in Cox’s Bazar to more than 900,000. The situation has become the fastest growing refugee crisis in the world.

“We are really happy with all the things we’ve been given,” Normeen says. “We have really needed them because of what we have been through.”