What I learned from giving birth in a developing country

The decision to give birth to my first child in Tanzania was a surprisingly easy one.

My husband and I had been working in the country for about 12 months and had just signed on for a second year, and it seemed every other week someone we knew was giving birth to a healthy, happy baby.

In my more arrogant moments (often after speaking to another Australian about my decision and seeing in their eyes what I liked to think of as wonderment, but very well could have been horror at my naivety), I thought having a baby in Africa made me seem brave and adventurous.

“Our baby will be born in Tanzania,” my husband and I would say to each other. “That’ll be a cool story.”

Then the reality set in.

Wake-up call number one: When I discussed my decision with my colleagues, they told me I was crazy. They said it was not unusual for two or three labouring mothers to share the one bed during childbirth. This was my first dose of reality. And it scared me.

I grew up on the carefree shores of the Sunshine Coast in Queensland, and wasn’t convinced I would have the same fortitude that so many women in Tanzania carry on their proud shoulders. Was I built for this?

Luckily, I had health insurance (something the vast majority of people in Tanzania do not have) and found a good hospital where I could have a bed to myself; something I will never take for granted again.

While I hadn’t planned to rely on medications, including an epidural, knowing they could be available was comforting … until I found out they wouldn’t be.

The hospitals in Arusha, a small city near the border with Kenya, have a very limited supply of painkillers. To get the same medication available in Australia, I would have to drive 10 hours to the coastal city of Dar es Salaam, or travel to Nairobi, a six-hour drive away in Kenya.

Australian doctors in Tanzania warned me obstetricians in Tanzania were often quick to resort to caesarean sections, something I also wanted to avoid if possible.

A caesarean section can often save the life of a mother, her baby or both of them, but being told the doctors were a “little caesarean happy” was not what a first-time mother wanted to hear about the hospital where she would be giving birth. 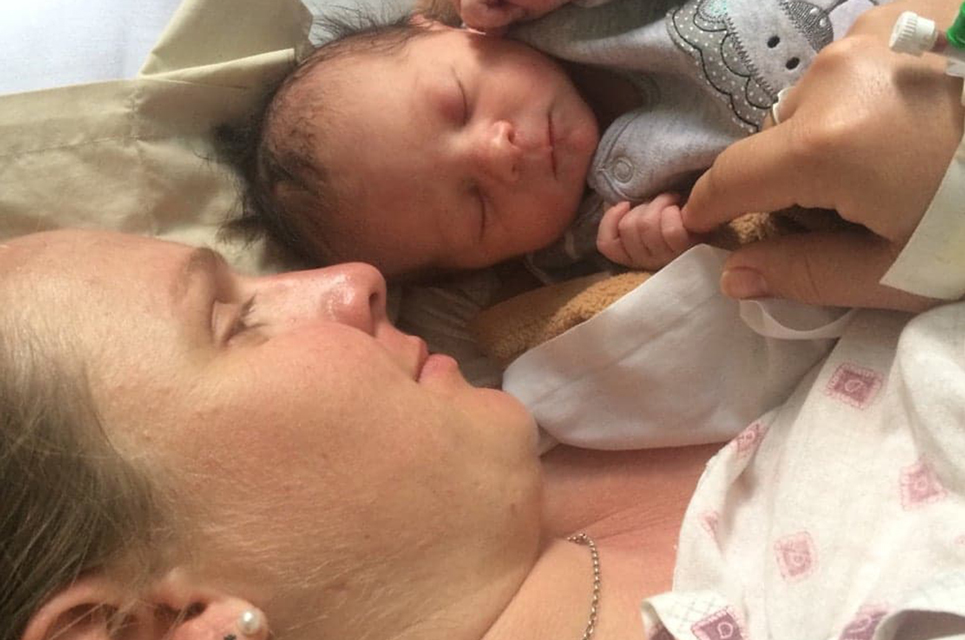 Me and my daughter, Isabelle, on the day she was born

Wake-up call number three: I found an amazing doctor who safely delivered our bundle of joy, but he was not our original doctor, and the birth ended up taking place in an entirely different hospital than we had originally planned.

We only met him a couple of months before our daughter was due, as our original doctor wanted to deliver our baby in a clinic that had yet to open. Unlike my husband and I, our original doctor  showed little concern about the clinic being up and running in time.

I didn’t have his confidence, so we sought an alternative. Hindsight proved we made the right decision: the clinic didn’t open until a few months after I gave birth. Life can move a little “pole, pole” (slowly in Swahili) in east Africa at times.

I had other worries, but they all seem so petty when I consider how lucky I really was. I was in Tanzania, one of the most dangerous places in the world to give birth. But I had excellent health cover and the luxury of admittance to a private hospital. I had my own bed and, most importantly, access to qualified doctor and nurses.

My situation isn’t the norm for expectant mothers in Tanzania. Most don’t get to choose their doctor, and are lucky if they have a qualified nurse or midwife to help them during delivery.

I met many children in Tanzania who never got to meet the woman who brought them into this world, or who had lost siblings, cousins, aunties and other people close to them because of the immense barriers women face getting access to healthcare.

I’m so happy the decision to have our baby in Tanzania turned out well for myself and my daughter. Without the professional healthcare and support I received, the outcome could have been so different. And I will always be conscious of what a true blessing it is to be able to safely give birth to a healthy child.