The outbreak of Ebola in Liberia is officially over. On Saturday 9 May, the World Health Organisation declared the country Ebola-free, marking 42 days since the burial of the last confirmed case of the deadly disease.

Liberia suffered the highest number of deaths of any country affected by the outbreak, with over 4,700 Liberians dying of Ebola since March 2014. At the peak of the epidemic, which occurred during August and September last year, the country was reporting 300 to 400 new cases every week.

Liberia’s last case of Ebola was a woman in the greater Monrovia (Liberia’s capital) area who developed symptoms on 20 March and died on 27 March. More than 300 people who had close contact with the woman were closely monitored but have all since been cleared. While Liberia has been declared Ebola-free, neighbouring Guinea and Sierra Leone continue to battle the outbreak, so there is a risk that infected people could cross into Liberia over the region’s extremely porous borders. The country has now entered a three-month period of heightened vigilance.

ChildFund’s emergency response has been focused on the care and support of children orphaned by Ebola. Through the establishment of interim care centres (ICC) in Liberia and Sierra Leone, children are provided with food, shelter, medical care and psychosocial support for a 21-day quarantine period, during which time efforts are also made to find relatives or foster families who will accept these children and provide them with a new home. In Liberia, centres were established in collaboration with the Ministry of Health and Social Welfare in the cities of Monrovia, Kakata and Ganta, just south of the Guinea border. 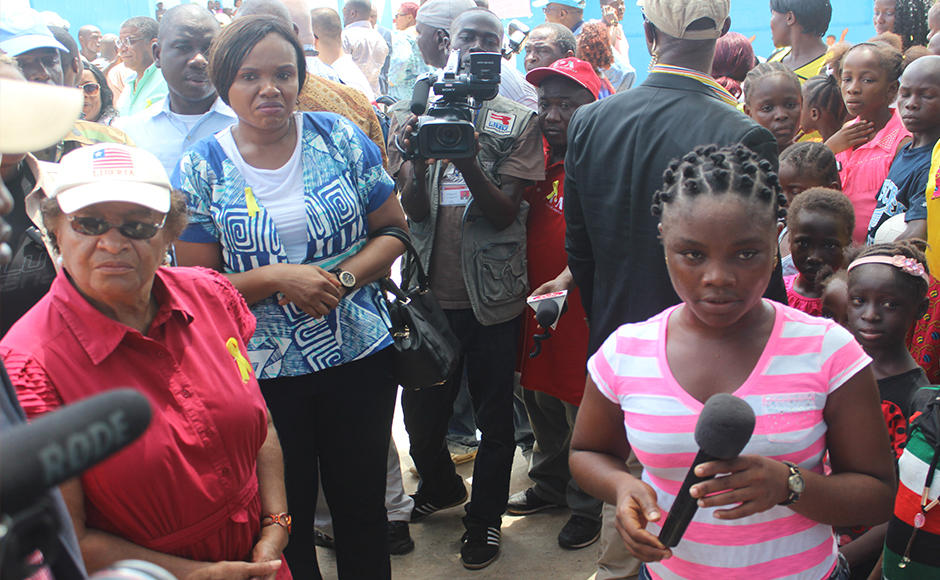 On Saturday, when the country was declared Ebola-free, Liberian President Ellen Johnson-Sirleaf visited the ChildFund-supported ICC in Monrovia, which was the first of its kind to open in Liberia. Since it opened in October 2014, the ICC in Monrovia has sheltered and helped dozens of chidren who lost one or both parents to Ebola. The president and her entourage toured the premises and heard from the dedicated volunteers who cared for children at the centre, who are themselves survivors of Ebola.

“We went through sleepless nights taking care of two- to four-month old babies at the centre,” Decontee, a 23-year-old mother-of-one (pictured above), told the president about the challenges faced by the volunteers. Decontee herself lost her fiance to the disease while she, incredibly, survived.

The president lauded ChildFund, its partners and the volunteers for their tireless efforts in helping children affected by Ebola.

“I am thankful to all of you who made this end a happy ending,” said President Johnson-Sirleaf. “Thank God we are free, but we need to be more vigilant.”

ChildFund’s ICCs in Liberia will soon close but staff and social workers will continue to monitor children who have now gone home – in some cases, new homes because their parents have died. Staff will check how they are coping with the loss of their loved ones and how they are getting along with their caregivers. ChildFund Liberia will also carry on distributing toys and shoes, provided by Hasbro and TOMS Shoes, to children affected by Ebola, as well as school materials so they can return to their studies. ChildFund’s ICCs in Sierra Leone will continue to operate until the country is also declared Ebola-free.

ChildFund Australia would like to acknowledge the generous donations of Australians, who have helped provide food, shelter, health care and support for children orphaned by Ebola through the interim care centres. ChildFund continues to support these children in the recovery process.