Liberia on the road to recovery

In Liberia, the last known Ebola patient who died of the virus was buried on 28 March. The country is hopeful that it is now on the road to recovery but, nevertheless remains on high alert. In Liberia, the outbreak began to subside in late October and had stabilised by mid-November, with daily reports showing only 10 to 20 new cases. Since January Ebola cases in Liberia have dwindled further.

ChildFund Liberia’s Kelekula Interim Care Centre (ICC), the first centre focused on the care and support of children orphaned by Ebola, was established in partnership with the Ministry of Health and Social Welfare in October 2014. 55 children have stayed at the centre. After being cleared of the disease, staff have coordinated with government officials to help place these children with relatives or in stable foster care situations.

18-month-old baby, Saydee (pictured above with his aunt) stayed at the Kelekula ICC after he lost his mother to Ebola.  Saydee now lives with his father and aunt in a makeshift community in Monrovia, Liberia’s capital. His aunt, Mabel takes care of him while his father works as a casual teacher with the Liberian Teacher Training Program. Saydee’s father is concerned about one thing – he is unable to take his son to the health clinic as ChildFund used to do. “I do not have means to take my son to the treatment facility whenever he gets sick. It really worries me,” he says.

Social workers now conduct regular visits to the homes of all children who stayed at the Kelekula ICC to find out how they are coping with the loss of their loved ones and how they are getting along with their caregivers. ChildFund also distributes packages of clothes, mattresses, school materials, footwear, toiletries and food, such as rice and oil, to each child when reuniting them with their caregivers. 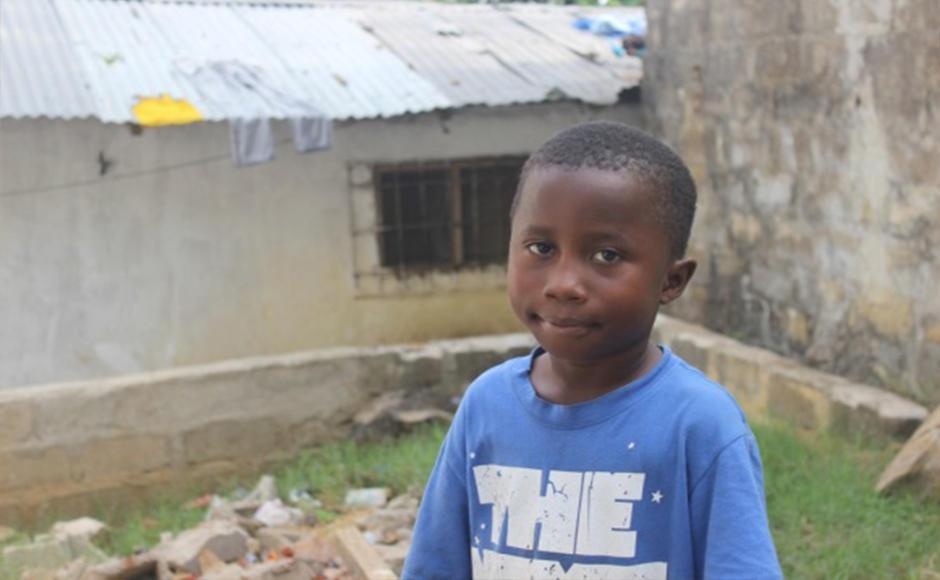 Six-year-old Jesse has been reunited with family friends.

This is six-year-old Jesse. At the Kelekula ICC, Jesse liked playing with friends. They rode the swing and the merry-go-round and played football in the compound. Jesse enjoyed the food they served each day. He has been reunited with family friends who live in Monrovia. “I am happy with the people I am living with now,” Jesse says.

His mother and grandparents all died from Ebola, and Jesse was visibly grieving when he was first reunited with his family friends, although he is doing better now. He looks forward to returning to school soon. “For now, we actually need some supports like clothes and school fees,” Jesse’s caregiver explains.

While Liberia is on the road to recovery, there are many challenges ahead for the small West African nation. People have been struggling to earn an income to feed their families. Community support networks have been devastated and children are only just beginning to return to school after at least 10 months of absence.

Billy Abimbilla, national director for ChildFund Liberia and Sierra Leone says: “Many children are experiencing such a traumatic situation for the first time. It’s going to affect them adversely for some time to come. So ChildFund, together with other actors and the government in Sierra Leone and Liberia, is working to reduce the trauma and stigmatisation of children. We must help them get back into normalcy, into normal development, so we can restore hope and dignity for these children and they can continue to enjoy their basic rights.”