In May, ChildFund ambassador Danielle Cormack won the TV Week Logie Award for Most Outstanding Actress as voted by her peers. A passionate advocate for vulnerable children and youth, Danielle took the opportunity while accepting her award to say: “There’s a lot of people in the world who need our help, especially in Nepal, so if you can donate through a reputable agency they really need our help right now.”

The actress has since put her money where her mouth is, teaming up with ChildFund Australia and eBay’s Bid for Good to auction off an once-in-a-lifetime prize to help raise funds for ChildFund`s emergency relief efforts in Nepal.

The winning bidders would receive two VIP tickets donated by the Sydney Theatre Company to see Danielle perform in the sold-out production Boys Will Be Boys – and have the opportunity to meet Danielle and the cast backstage afterwards.

So who were the lucky winners? Jamie and Leyla from Sydney, self-confessed super-fans of Danielle, joined forces to put forward their best bid – and after some fierce competition, they won!

“It was so exciting to win the auction. I had really wanted to see the show but couldn’t get tickets because it sold out so quickly so it was wonderful to have the opportunity to see it and then to meet the cast after was just incredible. Being able to support such a fantastic charity was an even better added bonus!” says Jamie.

Even more surprising was that cruise consultant Jamie and PHD student Leyla had never met before! They had been friends online for more than a year, having met through a fan site for ’90s cult TV show Xena: Warrior Princess. It was through this TV show that each of them discovered a young Danielle Cormack, who played the character Ephiny.

“I’ve been a fan of the show since it started in 1995,” says Jamie. “It just has such a strong, positive message. I like women characters that can kick butt and stand up for themselves. I think that’s why I liked Danielle in it so much because she played this Amazonian woman who was such a strong, gutsy female.”

A fan for 20 years, Jamie finally had his chance to meet Danielle when he and Leyla claimed their prize at Sydney’s Wharf Theatre. For Jamie, it was almost as exciting to meet Leyla in person for the first time.

“It was like we had known each other forever,” he says. “Meeting Danielle and Leyla in one night – it really couldn’t get any better than that!” 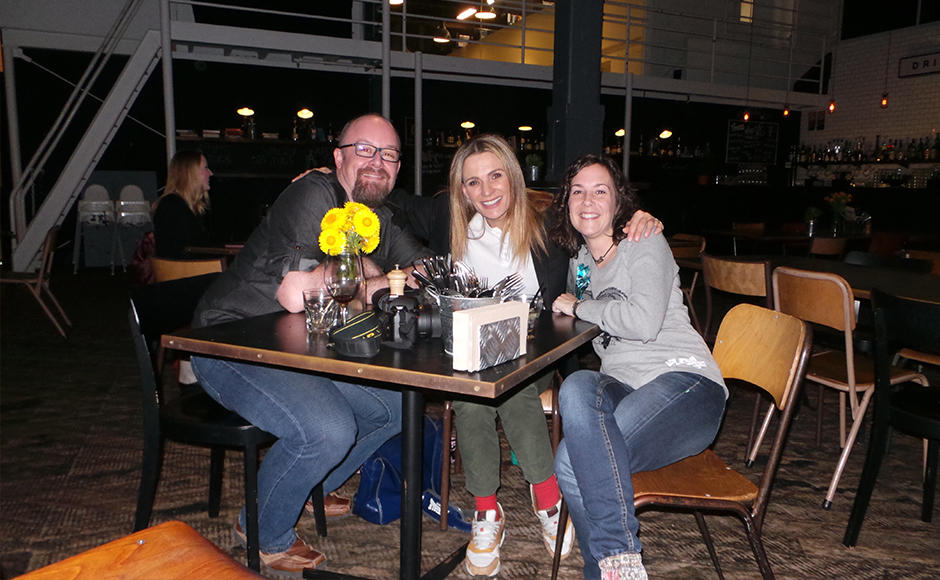 Danielle hanging out with Jamie and Leyla after the show.

Jamie says the show, Boys Will Be Boys, was “just amazing” and Danielle lit up the stage. “I don’t have the words for it, to be totally honest,” he says. “I was mesmerised by Danielle`s character, Astrid. You are really taken on a journey with her. At the start she seems so strong, ruthless even, but by the end of the show you see this really vulnerable, almost lost person. It was just fantastic.”

After the show Jamie and Leyla had the chance to meet their idol and the rest of the cast backstage. “I was so nervous about this part but the minute Danielle spoke it was just so comfortable,” says Jamie. “She bought us a drink and we sat about for an hour or so chatting. It was definitely more than I could have ever anticipated.”

Jamie and Leyla’s winning bid of $456 has been donated to ChildFund’s Nepal Earthquake Appeal, to help provide urgently needed food and shelter for children and families whose villages have been devastated. The need for assistance became even more urgent when, just two days before the show, a second massive earthquake hit Nepal.

“I think every little bit helps so it’s wonderful to know that this little bit will have an impact for a family in Nepal who are going through such a tough time right now,” says Jamie.