Why I’ve sponsored a child for 24 years

Why sponsor a child? For long-time sponsor Geoffrey Fuller the answer is easy.

Sponsorship not only benefits children and their communities, it has a life-changing effect on supporters, Geoffrey says.

“You get back a lot more than you give,” he says.

“You will feel good about it, and it will make a difference to your life as well. And it only costs a few coffees a week.”

The semi-retired IT specialist/accountant has been sponsoring children in remote villages in Uganda for almost 25 years and says people don’t need to make a fortune to help children in disadvantaged communities.

“I have always felt we should help others less fortunate than us,” he says.

“I give support despite a relatively small income so I would encourage all others, especially those on reasonable incomes, to take on child sponsorship.

“We, overall, here in Australia live a lot easier and have a higher quality of living than people in disadvantaged communities overseas.”

Geoffrey became a ChildFund supporter in 1994. He sponsored his first child, Simon, for more than decade (until Simon finished his studies at the age of 24) before signing on as the sponsor for four-year-old Aber in 2006.

The benefit of long-term sponsorship, says Geoffrey, is you get to see how sponsorship works and the changes you’ve contributed to in the communities.

It also helps people from different parts of the world, through the connection of sponsorship, form connections that will last a lifetime.

“It’s not just about giving money, it’s about helping them help themselves,” he says. “You’ve got to get them from simply receiving handouts to being self-sufficient, and that takes time and money.” 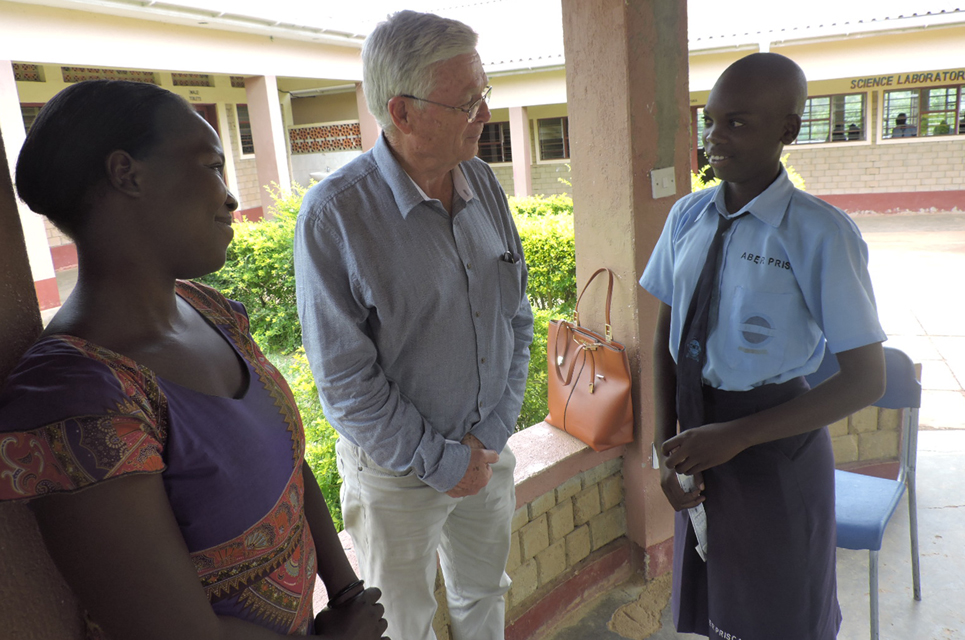 Geoffrey travelled to Uganda in 2016 to meet Aber, who he has been sponsoring for a decade

Geoffrey says keeping in contact with his sponsor children through writing letters provided a window into how his monthly donations had changed their lives.

“Being a long-term sponsor and being able to build that relationship with the children has allowed me to follow Simon and Aber’s personal journeys as well as the progress of their communities,” he says. “This is very special.”

“I remember a letter from Simon over 20 years ago where he told me how it took some in his community half a day to walk to get access to water for their family.

“I’ve seen a big change in the attitudes and quality of living for people in the villages and communities because of ChildFund’s projects, such as access to running water, coming to fruition.”

After more than a decade of sponsoring Aber, who is now 15, Geoffrey visited the teen and her family in their village in 2016.

Meeting Aber in person and being among her community, the visit really brought home how lucky he had it in Australia.

“We take almost everything for granted here,” says Geoffrey.

“In Uganda, just going to school ­- which, while they are not at the level we have here in Australia – is still a huge step in taking them towards self-sufficiency.

“These people have great needs far beyond anything we’ve ever had to worry about.”