Protecting children in the face of disaster

As Guatemala recovers from its latest earthquakes and more than one million children face severe malnutrition in the drought-stricken Sahel region of West Africa, the work of aid organisations is changing. The incidence and severity of natural disasters are increasing and there is growing international acceptance of the link between environmental issues and poverty reduction.

At the Rio+20 Conference in June, the UN Secretary-General’s Special Representative for Disaster Risk Reduction, Margareta Wahlstršm, gave some startling numbers. Over the last 20 years, it is conservatively estimated that disasters have killed 1.3 million people, affected 4.4 billion and resulted in economic losses of $2 trillion. Staggering when you consider what this means in terms of shattered lives and communities, missed opportunities and lost gains.

Here in Australia, we live in a disaster-prone region. According to the World Disasters Report 2010, in the period 2000-2009, as many as 85 per cent of people affected by disasters were in Asia and the Pacific. More recently, the Asian Development Bank has stated that people living in our region are now four times more likely to be struck by natural disasters than those living in Africa and 25 times more likely than those living in Europe or North America.

Children are particularly vulnerable when disasters strike. Reducing environmental risks is now recognised as a critical child protection issue, particularly in developing countries where people are disproportionately affected by extreme weather events. Increasingly our attention is turning to disaster risk reduction – building community capacity to cope with disasters and conflicts, and providing relief when disasters strike, so that children are safer and communities are more resilient in the face of natural, political or economic crisis.

For this to work well, children must be part of the solution. We know children experience the world differently to adults so it is important to engage them in issues that affect their lives. For example, in the Philippines, an Eco-Scouts program involves young people in disaster planning and management. In Laos, a program is underway to introduce disaster risk reduction through the school curriculum. Physical improvements can also be made to better protect children against disasters, such as building upper floors in schools in flood-prone areas and improving roads and bridges. 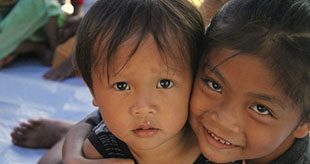 Small Voices, Big Dreams surveys thousands of children from around the world

Listening to the needs and concerns of children is the first step to increasing their protection. A new ChildFund survey of more than 6,200 children across the world reveals that children globally are deeply concerned about pollution and the risk of natural disasters. One-third of children cite pollution as the environmental problem they worry most about, while one-fifth are most concerned about natural disasters.

The survey also finds major disasters have a lasting impact on children’s fears. One in four children in Japan say they are most afraid of natural disasters, reflecting their experience of last year’s earthquake and tsunami. The figure is similarly high for children in Guatemala, which is prone to recurrent disasters, and in the Philippines, which is battered by an average of 20 typhoons each year.

The ChildFund report is a timely reminder for world leaders to consider the views of future generations, as the next round of UN climate talks begins in Doha at the end of this month. Young people must be at the heart of the climate change debate. Our children will inherit the world we leave them so it makes sense that we listen to their concerns about the environment.

Disasters can undermine, and even reverse, development gains. One affects the other and both must be tackled together. Investing in disaster risk reduction not only saves lives and livelihoods, but is critical to protect children now and in the future.