Simple interventions will save mothers’ lives in PNG

I was born in the small coastal village of Kivori, in Papua New Guinea’s Central Province. With no healthcare centre nearby, my mother gave birth to me at home, with the help of several traditional birth attendants as well as a traditional healer.

Instead of a delivery bed, an empty rice bag was spread on the ground for my mother to use during childbirth, and my umbilical cord would have been cut with a sharpened stick of a sago palm.

With no access to an ambulance and the nearest hospital – and doctor – a four-hour drive to Port Moresby, my mother would have been praying that there were no complications.

More than 30 years later, little has changed for the mothers of Kivori. Globally, and within the Asia-Pacific region, PNG has some of the worst maternal and child health indicators. At least one woman loses her life in childbirth every day. Most of these deaths are preventable.

It was on a visit to Brisbane last year that I was reminded how shocking the conditions are for mothers and their newborns in PNG. We may be Australia’s closest neighbour, with just 400km separating us, but the differences in our healthcare systems are like night and day.

The Royal Brisbane Women’s Hospital has over 400 doctors. This is only one of many hospitals servicing the city of Brisbane. The whole of PNG has fewer than 400 doctors, and my home province of Central Province has just one doctor servicing almost a quarter of a million people.

In fact, the entire healthcare system in PNG is beset by shortages – in doctors, nurses, midwives as well as facilities, medicine and equipment to make childbirth safer.

My village used to have a small aid post, but government funding cuts and a lack of trained staff saw it close in 2013.

So mothers wanting to give birth in a healthcare facility must now walk 10kms to a health sub-centre. Here, they will find a building without electricity or running water, without mattresses for the consulting beds, and a severe shortage of proper medical equipment.

It is not uncommon for the clinic to run out of medicines – even paracetamol. There are only two staff working here – with the same skills as a nursing assistant in Australia – so clinic times are office hours only.

If anything should go wrong, the closest ambulance is a 45-minute drive away and patients must pay 200 Kina (more than a month’s salary) to travel to Port Moresby to go to hospital. If transport can even be found.

This dire lack of professional, accessible healthcare is why so many women from my village will choose to instead give birth at home. In Central Province, four out of five women do not have the support of a skilled birth attendant during childbirth.

And while homebirths are increasing in popularity in Australian, fewer than 1 per cent of Australian women will give birth without the care of qualified health professionals. 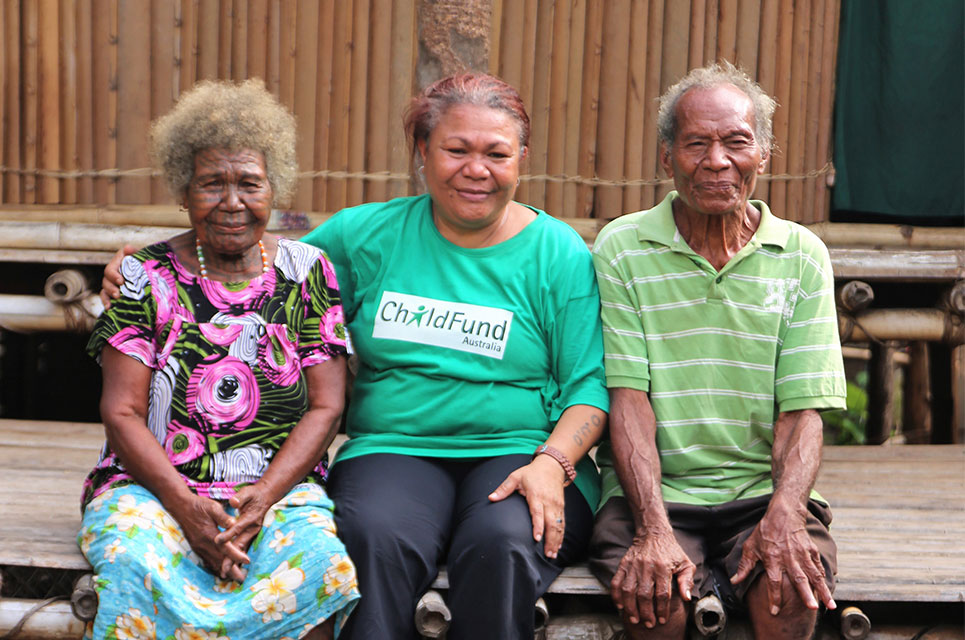 Olive (with her parents) grew up in a small rural village, so understands only too well the risks facing women as they prepare to give birth.

The PNG government has set ambitious targets to reduce these frightening statistics but reaching these targets will require a significant increase in the number of doctors and midwives in our country.

Training people as midwives and doctors takes time, so while we are developing a new generation of qualified healthcare staff, we need to address urgent issues at the community level if we are to save lives.

As the head of ChildFund Papua New Guinea’s national health program, I am responsible for programs to give women in rural villages like mine access to a better quality of care when it comes time for them to give birth.

We are working to increase technical skills and knowledge at a grassroots level. This means not only upskilling community health workers in remote communities, but training new village health volunteers so they can offer basic health support to pregnant women unable to reach a clinic.

We provide delivery kits which contain a plastic ground sheet to give birth on, soap to wash hands, gauze to wipe a newborn babies’ eyes, and a sterilised blade to cut the umbilical cord. These reduce the risks of infection and possible death for both mother and child.

We distribute lighting kits so that health workers can see what they’re doing during. With proper lighting, it is possible to determine whether the whole of the placenta has been delivered and, if not, ensuring a woman is referred to hospital. Retained placentas are leading cause of infection and hemorrhaging and can result in death.

In an ideal world, we want mothers to have their babies in clinics that are staffed with skilled healthcare professionals and which can cater for any complication during delivery.

But right now, the reality is that most women will continue to give birth in the village – either at home or in makeshift clinics. So we have to make it safer.

We are delivering simple interventions but we know that they are effective, cost-efficient and that they will save lives. Women in Papua New Guinea’s villages have waited far too long for access to better healthcare.