Tuberculosis (TB) remains a major, but often unrecognised, cause of disease and death among children in countries where the infection is endemic, like Papua New Guinea (PNG). Worldwide, of the 9.6 million people estimated to have fallen ill with the disease in 2014, one million were children.

Why providing TB treatment to vulnerable children is challenging

Getting treatment to children in these contexts is stymied by the lack of strategies and tools to guide diagnosis and treatment. The World Health Organisation lists the major reasons for this:

1. TB in children is rarely bacteriologically confirmed. As Dr Henry Welch, paediatrician and senior medical officer at Port Moresby General Hospital explains, diagnosis relies on patients coughing up sputum samples – which can be difficult to obtain from a young child. Even if a sample is obtained, it may not show a lot of TB “bugs” even if the disease is present.

2. Even when diagnosed, cases are not always reported to public health authorities. There are discrepancies between the data methodologies. These factors skew statistics and the imperatives for future programs.

3. In high-burden countries, children get lost under the weight of adult casualties. Dr Welch explains that childhood TB, not just in PNG but worldwide, is often put on the backburner because from a public health perspective the focus is on controlling TB in adults, because it is they who typically spread TB. This is despite, as Dr Welch believes, that children are most affected by the disease. 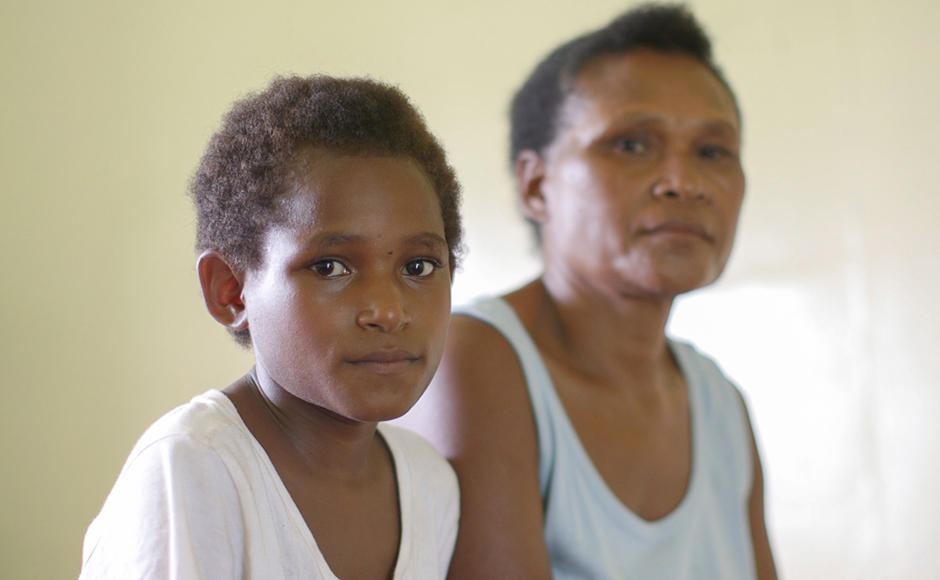 Papua New Guinea has one of the highest prevalence rates for TB globally, with children accounting for one-quarter of all detected cases.

TB and its prevalence in children

Children account for 26 per cent of detected TB cases in PNG, according to figures from the PNG National Department of Health, although this is likely just a fraction of the real story.  Dr Welch is convinced that malnutrition “absolutely” plays a substantial part in the disease profile. “In PNG, 43 per cent of children are too short, they are stunted, because they don’t have proper nutrition. That’s almost half the population of children.”

This is supported by UNICEF, which states that malnutrition is the underlying cause for the majority of deaths of children under the age of five in PNG.

Dr Welch adds: “TB is one of those social diseases. The medicines for TB really aren’t that difficult – we’ve got that figured out. But it is really about treating the social problems behind the disease … it’s a disease of poverty.”

ChildFund’s health project coordinator Olive Oa has both professional and personal experience of the potentially lethal obstacles facing children with TB in PNG. This includes growing evidence of undiagnosed TB in children in the communities she visits in Central Province as part of her work.

“Because adults are not getting treatment, you will then see children with large lymph nodes. The parents think it is normal until the child starts to lose weight and becomes tired, then they get diagnosed as having TB.”

“The medicines for TB aren’t that difficult. It is really about treating the social problems behind the disease … it’s a disease of poverty.”

Olive was convinced that a 10-year-old boy within her own extended family had tuberculosis. She told health workers her suspicions, but he was misdiagnosed at two clinics in Port Moresby, and again at a hospital. When a chest X-ray came back clear, she pushed hard for a referral for more tests. Her determination meant the boy eventually had a CT scan, and was diagnosed immediately. The TB was in his stomach.

By this time, the boy was gravely ill. But within a week of treatment his health had improved dramatically. “He ate a lot of food. He gained back weight. He took the medicine for nine months,” Olive reports. Today he is in his second year at university.

The luckiest recover from TB, but at a substantial cost to their education

ChildFund Australia CEO Nigel Spence says: “It is shocking that globally more than 140,000 children die each year from TB, and that one million become sick, from an entirely curable and largely preventable disease.

“The luckiest recover, but at substantial cost to their education, their prospects and their families, whose fragile livelihoods are eroded by the effort to provide care, medication and nutrition to sick children over months and even years of treatment. This feeds into a generational cycle of disadvantage.”

Mr Spence adds: “We continue to urge leaders to find the will, resources and strategies to win the war against TB. In the meantime, ChildFund remains committed to equipping communities at the frontline with the means to win their battles, to save lives and livelihoods, and protect children’s futures.”

Help save lives and livelihoods

We believe that every child should have access to adequate healthcare, in order to detect and treat diseases like tuberculosis.

It only takes one person to change the life of a child. Your contribution will help fund life-changing programs that build resilience in children and, improve their well-being.

This World Tuberculosis Day, on the 24 March, donate to help cure vulnerable children of TB in Papua New Guinea and around the world.