The valley of watermelons in Papua New Guinea

Vavine is a farmer from Kore – a small, rural community in Papua New Guinea sometimes referred to as the Valley of Watermelons. When the trucks from Kore arrive in rural marketplaces loaded with fresh fruit, market sellers who make a living transporting fruit and vegetables to the capital of Port Moresby are quick to negotiate a sale.

“I always look forward to selling my watermelons,” says Vavine. “It is the fastest selling produce I have ever sold compared to other vegetables. Every time we go to the markets they are sold out within an hour or two. And we earn a good income from our sales.”

Vavine started planting watermelons on a small scale a few years ago. He was surprised to see how much income they yielded in such a short period of time – especially when compared to crops such as yam, cassava or bananas which can take years to grow. His first watermelons were ready after just three months.

The land around Kore is also very fertile, and is largely uncultivated. Vavine says: “We depend on the weather to cultivate land. Using our traditional knowledge, we plant different crops according to the wet and dry seasons. We planted watermelons just like any other food crop –often integrating them with other crops.

“We never really thought beyond our traditional methods until ChildFund Papua New Guinea and the Nationals Agricultural Research Institute (NARI) started a new project in our community: working with our Community in 2015 through the project. 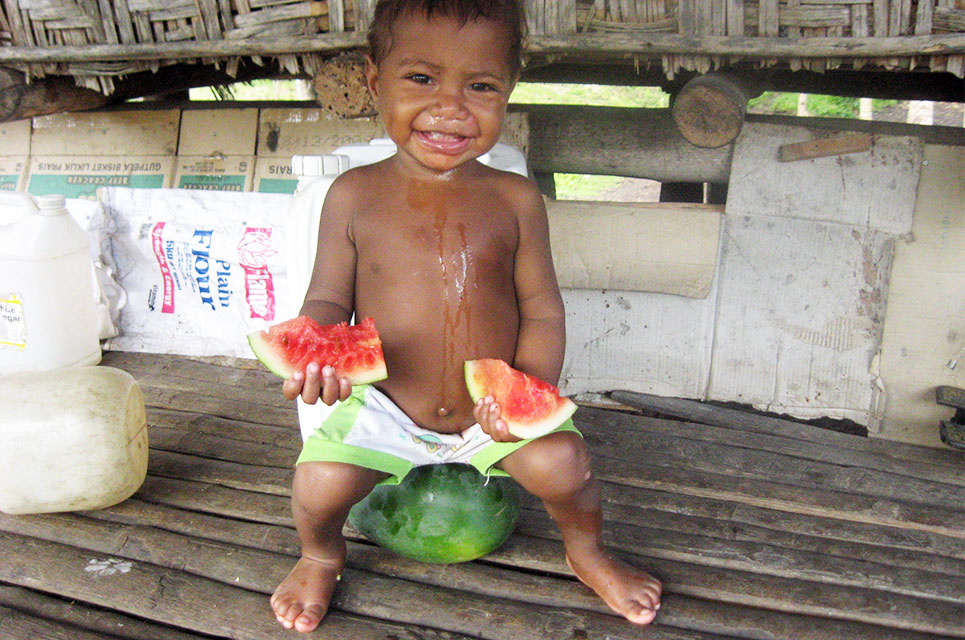 “Watermelon has helped me and my community build permanent houses, purchase trucks, buy tractors to plough the land, pay school fees and food.”

Kore was one of the twelve communities in Rigo District to implement this project, which looked at how rural farmers might benefit from a range of agricultural interventions, with a focus on drought resistant crops. Around 130 farmers were trained on financial literacy and improved farming practices, including nursery management, soil and water management, crop protection, post-harvest management and marketing. This project is supported by the Australian Government.

Vavine sells his watermelon produce in 50kg bags. A few months ago, he sold fifteen bags, making a 100% profit on his original investment. Demand for watermelons is still outweighing supply, yet only a small group of farmers have tapped into this market.

“Watermelon has helped me and my community build permanent houses, purchase trucks, buy tractors to plough the land, pay school fees and food,” says Vavine. “As long as the demand is there, I will continue to plant watermelon with other vegetables for my family and to sell.”