A new job is always cause for celebration. For Alvin from Queensland, then only 21, he celebrated by sponsoring a child with ChildFund Australia.

In 2013 Alvin decided to take his relationship with ChildFund one step further by signing up for our Sri Lanka Cycle Against Poverty, an 11-day adventure which saw a small team of dedicated supporters take on a challenging 400km cycle around Sri Lanka and raise money for families living in one of the poorest districts in the country.

“I decided that I wanted to see myself struggle at something, because I know that I could never truly understand how these families live every day. I wanted to see if I had the strength in me to do a challenge like this,” says Alvin.

“The days of cycling were full-on, we cycled all day and any time we had spare, we did tourist visits. I hated waking up early but I loved that there wasn’t any time wasted. It was an amazing trip, especially meeting lots of people from the communities supported by ChildFund and just hearing about their stories.”

While Alvin admits cycling is not really his cup of tea, that didn’t stop him from taking on some of the steepest inclines Sri Lanka has to offer. The team spent six days cycling through the Sri Lankan countryside, which involved tackling the infamous tea plantation region and climbing over 1,800 metres above sea level in just one day!

For Alvin, the trip was made even more special by taking the opportunity to visit one of his sponsored children. Alvin farewelled his cycling teammates in Colombo and embarked on a five-hour car journey to a rural village in Puttalam, where he met five-year-old Mohommed, who he has been sponsoring for the past two years.

“It was a very long trip but it was amazing when I arrived and there he was with his parents holding a garland for me,” says Alvin. “We were both very nervous but he came up to me and gave me a big hug.”

At the beginning Mohommed was very shy, but Alvin made him feel more comfortable by spending some time colouring in with him, before they headed outside to kick a ball around with a few children from Mohommed’s village. 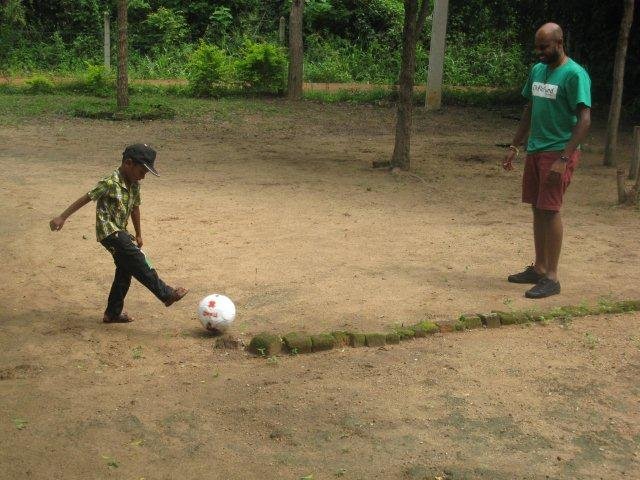 “It is great to send your money and write letters but it becomes entirely different when you can actually go and meet them and spend some time with them,” Alvin.

“The highlight for me was definitely kicking the ball around and seeing Mohommed really enjoy hanging out with me,” says Alvin.

Mohommed’s parents were both there to meet Alvin too. They asked him lots of questions about himself and his life back in Australia. “It was very nice that they were so interested to hear about me. They also told me all about Mohommed and their family,” says Alvin. “Mohommed wants to be a builder when he is older!”

After enjoying a big meal, cooked by Mohommed’s family, and seeing some of ChildFund’s work in the local community, Alvin headed for an early night before his long journey back to Colombo and flight home. But there was one more surprise in stall for Alvin!

Some big guests had wandered into the village he was staying in overnight. “I got to see five wild elephants near my hotel!” says Alvin. “Amazing is all you can say about this trip, one of the best yet, for sure!”