Many children who receive bikes through ChildFund’s Dream Bikes program are in isolated communities and face long journeys across rough rural terrain. It’s a little different for children in Jakarta, the huge capital city of Indonesia. Children there live in dense, crowded slums, and to get to school, they have to walk or take the public bus or a motorbike, a big daily expense for families living in poverty.

“When they fold the bike, it won’t take up as much space,” explains the organisation`s director, Liest Pranowo. “These children walk every day to school and their after school activities. Having a bike hopefully will help them to get to school easier, get in on time and be more active in out-of-school activities. It would save their parents some money too. Usually, it costs about US$2 for a rental motorbike. It is just too much for them. As children are very active, we also provided them with helmets. If they fall, their heads will be protected.”

Let`s meet Aisyah, a 12-year-old girl who likes watching the news and hopes to be a doctor one day. She received a bike and helmet, and it`s making a difference already. These are her words:

“I walked to school and back every day with my younger brother. He’s in the second grade. I leave home around 5am and get to school by 5:30am Often I came late to school, especially on Mondays and Fridays. On Mondays, we have a morning ceremony where we need to be ready a bit early, and on Friday we have group study and exercise that I need to come early for too.

Once, there were other kids in the street from another school who made fun of me. They would say something bad, like “Oh, you are a hobo! Even your school is the school for hobos!” They were boys, four of them. I would tell them to please not say something like that, as they wouldn’t want other people to say something bad in return, right?

Another time, when I came home from school, these boys said something bad to me again. One of them pulled my hair from the back and pushed me down. I fell down and cried. A taxi driver stopped them. When I got home, I told my mum, and she then went to their house, but they still didn’t want to say sorry. 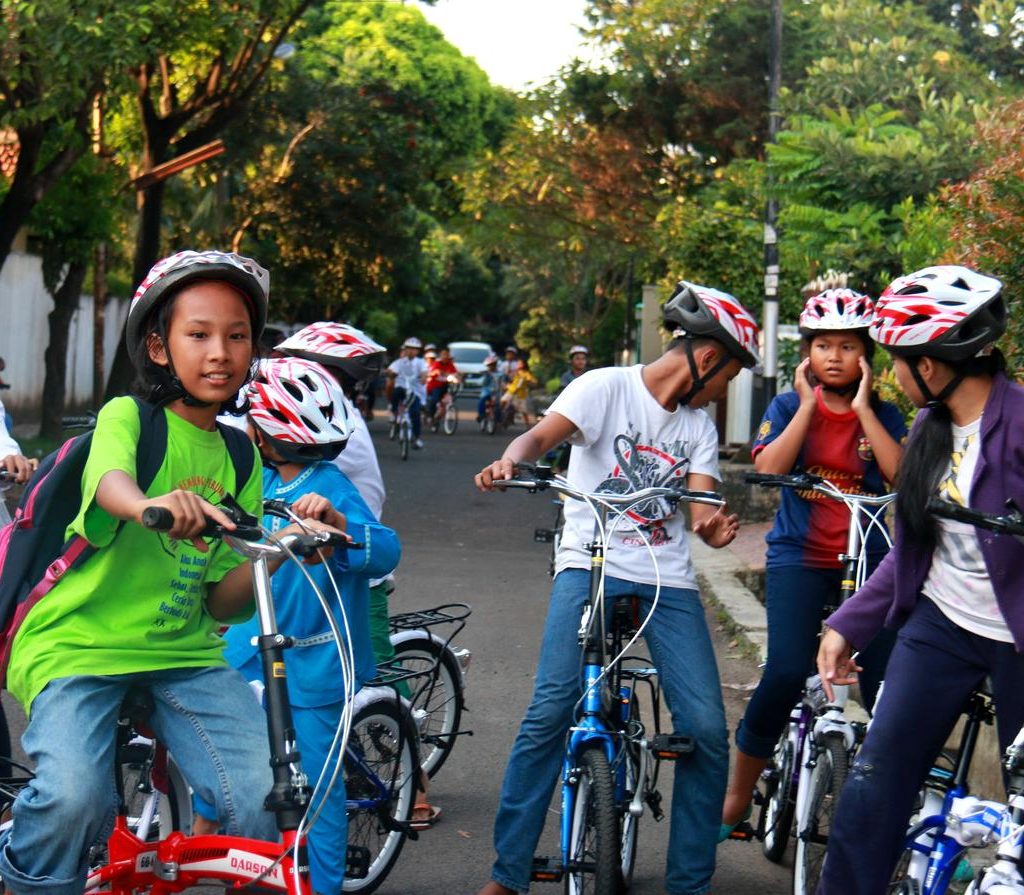 Aisyah and her friends with their new bikes.

Since I am in the sixth grade now, there are days where I stay longer in school for extra classes. That’s fine, as I need to be prepared for the exams. I take extra classes in math, science and Indonesian language. But sometimes when I got home, I was too tired from walking under the hot sun to study again or do my homework.

When I finish school, I am going to be a doctor! I want to help people who are sick. But if they don’t have money, I will do it for free. It’s all right. Even though our government has health insurance, it is not enough to cover everything.

One day I saw in the news that a mother had just given birth. The hospital kept the baby longer as the baby was born premature, and the family couldn’t afford the cost for the treatment. That’s why I want to be a doctor, to help people in need like that.

I am really happy I was given the bicycle by ChildFund. I will ride the bike to school. The bicycle lets me get to school on time, and now I have more time to do my homework. I will even take my brother in the back saddle!”

Read about two young girls from Jakarta talking about how their lives have changed since receiving their new fold-out dream bike.