The legacy of war in Laos

“Some families just have bad luck,” says Mun, 42, as she sits with her husband Siphone, 42, waiting for passing vehicles to purchase gasoline from their shopfront. The gasoline business is a new venture following a cluster bomb accident that devastated their family two years ago.

On that fateful day, Mun’s brother Bounmy, aged 28, was helping to farm the family`s plot when he struck a UXO (unexploded ordnance) that exploded on impact. He died instantly along with one of Siphone and Mun’s daughters, Kingkeo, aged 14. Mun and her sister-in-law were also injured and have shrapnel embedded in their bodies. They cannot afford to have it surgically removed and must live with the pain it causes.

Siphone shows us where the accident occurred. Their farming plot sits at the top of a mountain approximately 400m from their house in Nonghet district, among the peaks of Xieng Khouang province. The family had grown crops there in the past without incident, but the accident has left them scared for their safety.

Even though they are poor, Mun refuses to work in the field since the accident, and two of the couple’s three surviving children have moved to Vientiane to work as cleaners and servers in restaurants out of fear that they will end up being killed like their sister. Phimpha is 12 years old and too young to move away.

Without their crop, the family will not have enough food to eat, so Siphone and Mun have borrowed money to hire people to work in their field. Through these efforts the family has just enough to survive, but it would not suffice if all their children were still living at home. 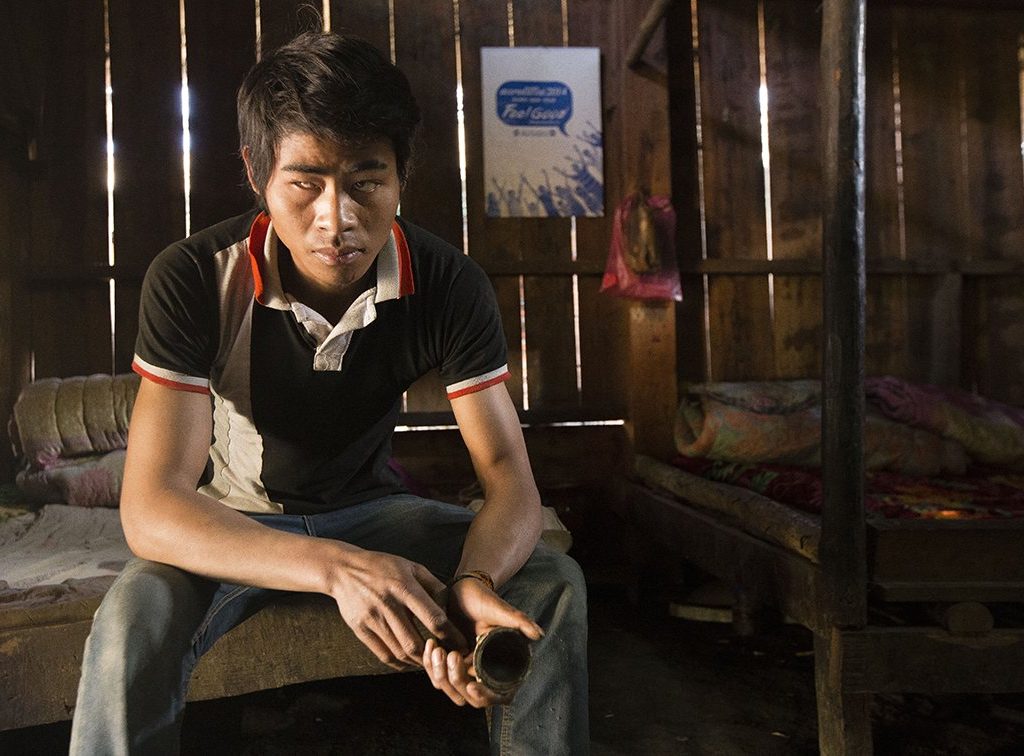 The impact of UXOs lasts long after an accident itself. Ped suffers from depression after losing three of his siblings in a bomb accident and being left disfigured himself at the age of 11.

Ped lives in a village close to the Vietnamese border, in Nonghet district. When he was 11, he was working in his family’s field with his mother and siblings. His 13-year-old brother Oat was digging with a shovel when he struck a UXO, the explosion killing the 13-year-old boy instantly along with their sister Mai, 15, and eight-year-old brother Pui. Ped was knocked unconscious.

While Ped survived, he lost his right eye and still has shrapnel lodged in his head, which causes him pain and fever. The family can only afford to buy paracetamol to help ease Ped`s pain.

Now 23 years old, the gravity of Ped`s injuries has set in. As a result of the accident, he is physically unable to have children. Even though Ped is a strong and capable young man, he explains that he finds it “emotionally difficult” to live his life. Ped recognises that he is not like his other friends and that he would be married by now had the accident not occurred. For Ped, “joy does not seem to exist.” He is suffering from depression.

Ped`s father died last year. As the only male left in the family, Ped has no choice but to overcome his fear of UXOs on a daily basis, and support his mother and sisters by returning to the field that not only took the life of his two brothers, but stole his life as well.

These stories and images from ChildFund partner communities in Nonghet will be featured as part of Beyond the Gate, an exhibition of Student Documentary Projects in Cambodia and Laos, at Whitebox Studio, Queensland College of Art, South Bank. The exhibition runs from 23 April to 3 May.

4 April is the International Day for Mine Awareness. Read this article by former Deputy Prime Minister and ChildFund Australia envoy Tim Fischer.