Two months after the first of two massive earthquakes to hit Nepal, an estimated 2.8 million people are still in need of humanitarian assistance and hundreds of thousands of people are living in makeshift shelters, including 117,000 who are living outdoors in tents.

With Nepal now in monsoon season, the country is at high risk of further damage. The earthquakes followed by thousands of aftershocks have caused fractures and weakened rock masses leaving the land and hill slopes highly vulnerable to landslides, especially during monsoon. For families living in Nepal’s remote villages, the next few months will be particularly precarious.

Swasthani (pictured above with her daughter, Ristika) and her family live in Sindhupalchok, one of the worst-hit areas in the country. Their home was completely flattened in the 25 April earthquake. Swasthani’s husband salvaged metal from their local area to build a communal shelter to protect them and their relatives (who also lost their homes) against the monsoonal rains. Three families – 10 people – are currently living in the tin house, which is pictured behind the crumbled remains of Swasthani’s original home.

The World Bank estimates the effects of the disaster will push up to one million people into poverty over the next year – on top of the more than 850,000 people already living below the poverty line in Nepal. These people will become poorer due to loss of homes, income-generation opportunities and assets such as seeds, livestock and household items. ChildFund is helping to provide a safety net for children and their families who are most at risk. 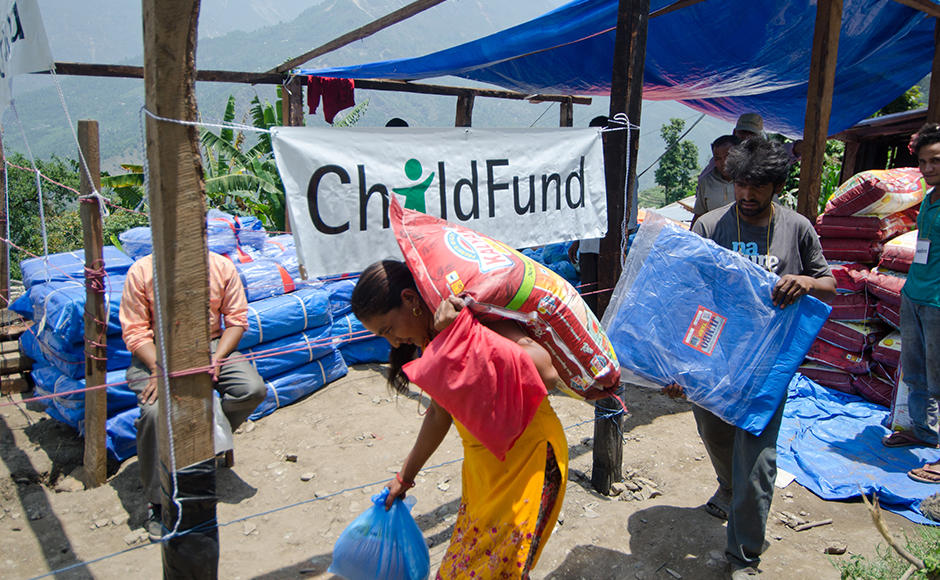 More than one million people continue to require food assistance to meet their daily dietary needs. Before the rainy season commenced, ChildFund completed a second round of food distributions for 3,103 families who were low on food supplies in the four remote communities we are supporting in Sindhupalchok. Each family received a food basket based on UN recommendations of 30kg rice, 4kg dhal, 1kg salt and 2 litres of cooking oil, which is benefitting almost 12,000 people.

In these rural villages, where most families rely on agriculture for their livelihoods, many people will be able to use the rations they received along with the food they have remaining from their terraced fields. Since May, ChildFund has provided a total of 161 metric tons of essential food items to families in need, with a third distribution planned in the coming weeks.

ChildFund is also helping these families set up temporary shelters, providing tarpaulins and groundsheets to help weather the monsoon, which will last until the end of August.

“There is still so much need, especially in the reconstruction of homes and schools, and restoring people`s livelihoods ,” says Mariko Tanaka, ChildFund`s country director in Nepal.

“We would like to extend our gratitude to everyone in Australia and around the world who has donated to ChildFund`s emergency response. It is thanks to your kind support that we are able to continue the recovery effort for children and families in Nepal.”