An oasis of calm amid fighting in the Philippines

Rebels recently attacked the coastal communities of Zamboanga City in the Philippines, taking civilians hostage and using them as human shields. After several weeks of fighting, the government quelled the attacks and security is returning to the area.

ChildFund works in six communities in and around Zamboanga City. Although children enrolled in ChildFund programs were not directly affected by the fighting, ChildFund’s local partner organisation, the Holy Rosary Family Centre, under the leadership of Sister Nini, set up Child-Centred Spaces to ensure children had a safe place to gather, play and express any fears.

This is a day in the life of Sister Nini (pictured above, wearing white and black headpiece) during the standoff…

Sister Nini is used to getting up at dawn. Like other Dominican sisters in her order, she takes her morning prayers silently before dawn. It`s been more than a week since fighting erupted in the Philippines’ Zamboanga City and there`s much work to be done.

Within an hour of waking, Sister Nini has already picked up seven volunteer mothers and youth. Though it’s a tight squeeze, everyone fits in the cabin of her order’s pickup truck. Laughter fills whatever space is left, as her company tries to keep their spirits up and their legs from falling asleep. Thankfully, their destination, Boalan – an elementary school that has doubled as an evacuation centre – is not far. Though they are far enough from where the fighting continues in Zamboanga, Sister Nini is always wary of the possibility of danger on the road. 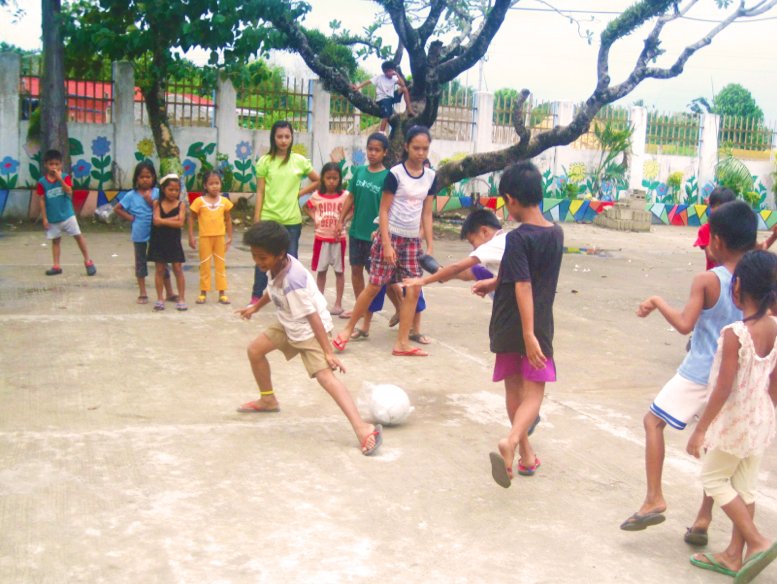 Children playing at an evacuation centre

Arriving at the school grounds, Sister Nini and her volunteers unload the contents off the flatbed. There’s rice, canned sardines, instant noodle packs and biscuit tins donated by former students of Nini’s from her days at Ateneo de Zamboanga and St Joseph School. She and her volunteers also unload bundles of lush malunggay leaves, mustard greens, bright orange carrots, lettuce stalks and lengths of string beans, all harvested from the sisters’ organic vegetable plot at the convent. The women carry the vegetables to a makeshift kitchen on the school grounds.

Dawn`s first light brings warmth to 56 families who`ve spent the evening with little more than woven mats or flattened cardboard boxes between them and the cold pavement of classroom floors. Dawn also brings the aroma of a hot breakfast, wafting through the wooden shutters and rousing weary evacuees from their sleep. The government has been providing and coordinating aid to this evacuation centre and others as fighting displaces families. Today, breakfast is steamed rice porridge (called arroz caldo) with fresh vegetables.

Sister Nini does not always stay through breakfast at this centre. She makes the rounds of three more evacuation centres, setting up Child-Centred Spaces at these four sites. These spaces host activities addressing displaced children`s psychosocial needs, playing, and creative and productive expression of their emotions. Nini alternates her schedule for her own security.