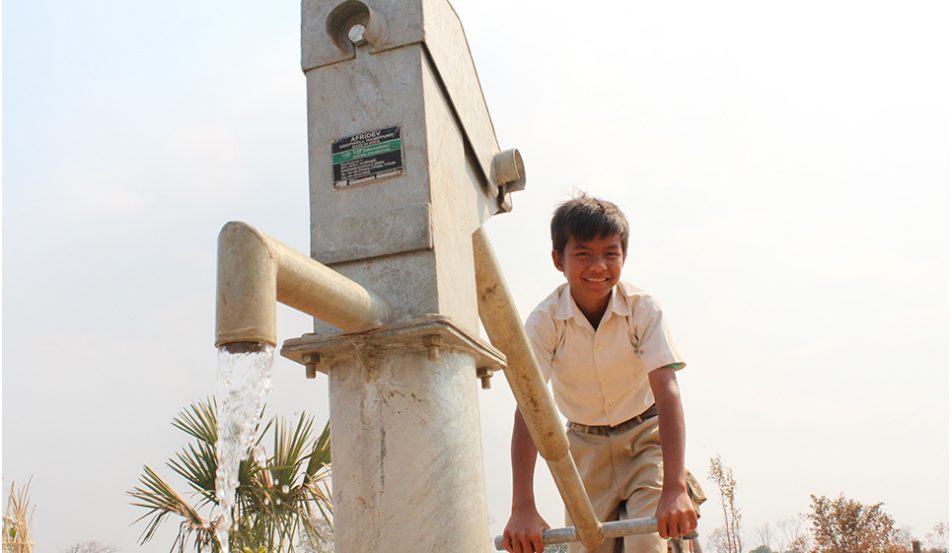 Unreliable sources of water in rural communities can be devastating for children and their families, leading to life-threatening illnesses, diarrhoea and even famine. ChildFund sponsors have helped a young boy and his family in Zambia overcome these challenges.

Joshua is a shy nine-year-old boy from a remote community in south-central Zambia where, for generations, hundreds of families struggled to access water.

For Joshua, the water challenges in his community forced him to grow up too quickly, too soon.

Up until he was six years old, he spent most of his time looking after his two younger sisters while his parents collected water throughout the day.

His parents were out for hours at a time, and he would often have to soothe his little sisters when they cried.

“They would cry because they were hungry,” Joshua said. “I would try to make them stop crying. I used to hold my baby sister until my mother came, and give her some leftovers from the previous night.” 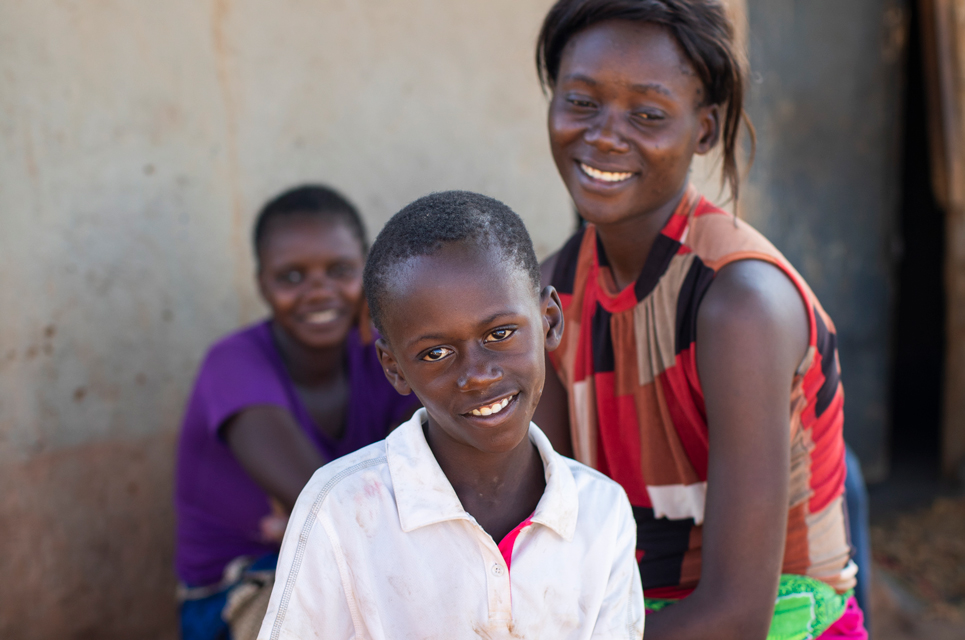 Joshua, 9, with his mother Christine who used to walk several kilometres a day for water. Photo: Jake Lyell

Joshua’s parents – Christine and Richard – woke up at 2am every day to collect water from a river almost two kilometres away, the community’s nearest water source.

Sometimes when they arrived at the river it would be infested with crocodiles or worse, there would be little water left.

“If you hadn’t woken up early enough, you would find your friends and neighbours had collected all the water,” Christine said. It was then another two-kilometre walk to the second water source along the river.

The couple made seven trips to the river a day between them, balancing a 20L bucket on their heads back home each time.

“There were times we would go without water. We would go and beg very far away.”
– Christine, Joshua’s mother

Their days were 16-hours long, split between collecting water and working on a small field where they grew maize and vegetables to eat.

There was little time left to care for their children, leaving their eldest – Joshua – to look after his sisters.

Kenneth, the deputy head of Joshua’s community and a ChildFund Zambia Parent-Family Educator Volunteer, said many families like Joshua’s had no choice but to leave their children at home during the day.

“If they can’t go to work in the field, there will famine,” Kenneth said. “There will be a lot of hunger because they depend on going to the field to work so they can eat. If they can’t go there as often as they should, then poverty sets in.”

In addition to having to travel kilometres to the river, Joshua and his family got sick or suffered from diarrhoea almost every day  from drinking the water.

Joshua recalled having terrible stomach aches. “I didn’t know what the pain was, so I was scared,” he said.

Globally, diarrhoea is the second leading cause of death in children under five years old, killing around 525, 000 children every year.

The prevalence of illnesses and diarrhoea as a result of drinking unsafe water compounds the risk of families in remote communities like Joshua’s falling into poverty.

“Life wasn’t good,” Kenneth recalled. “You can’t stay well when someone is having diarrhoea. Instead of going to the field, we had to go now to the health clinic.”

Dangers of the dry season

The only thing worse than getting sick from drinking unsafe water, is not having any water at all.

During the dry season in Zambia, the lack of rain can make accessing water a nightmare in rural communities.

Sometimes the river in Joshua’s community dried up completely, and families would use hoes and picks to dig under the river bed.

“There were times we would go without water,” Christine said. “We would go and beg very far away.”

The only thing worse than getting sick from drinking unsafe water is not having any water at all. 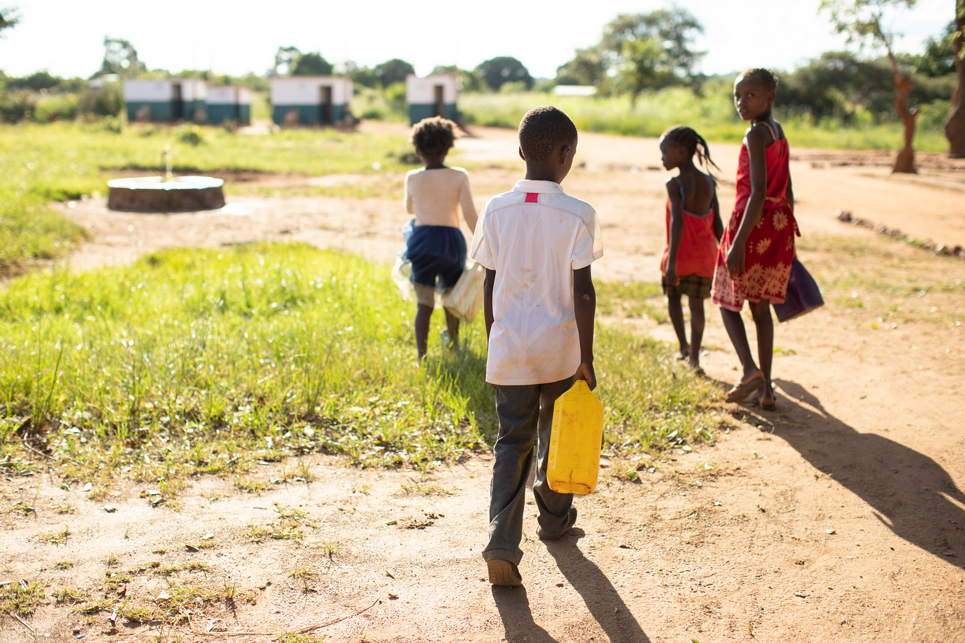 Joshua (in white) and his friends only have to walk 300 metres to access water now. Photo: Jake Lyell

Things only changed after ChildFund Zambia drilled three boreholes in the community in 2016.

Two of the boreholes were installed at Joshua’s school, providing water to hundreds of students and more than 100 households.

Today, the nearest water source for Joshua and his family is a hand pump 300 metres from their home.

When it is time for a shower Joshua often collects his own water, using a little yellow jerry can.

Christine and Richard only need to make two trips a day now to get water, which has given them more time to spend with their children, work in the field and do odd jobs to earn some income.

While the water from the boreholes is much cleaner than the river water, it still needs to be treated for drinking purposes. Through training community leaders and ChildFund volunteers like Kenneth about healthy water and sanitation practices, families in Joshua’s community now understand the importance of boiling their water or treating it with chlorine (supplied by ChildFund) before drinking it.

These simple practices have led to a significant reduction in the number of cases of illnesses, especially diarrhoea.

“Things are easier now and the children don’t get sick that often,” Christine said. “It’s been almost three years since Joshua had diarrhoea.”

Now, no longer having to take care of his sisters and carry the weight of adulthood, Joshua has time to play and go to school. This year he is in Grade 2.

“We are thankful the water is now nearby,” Christine said. “I want our children to be in school. We want them to be educated.” 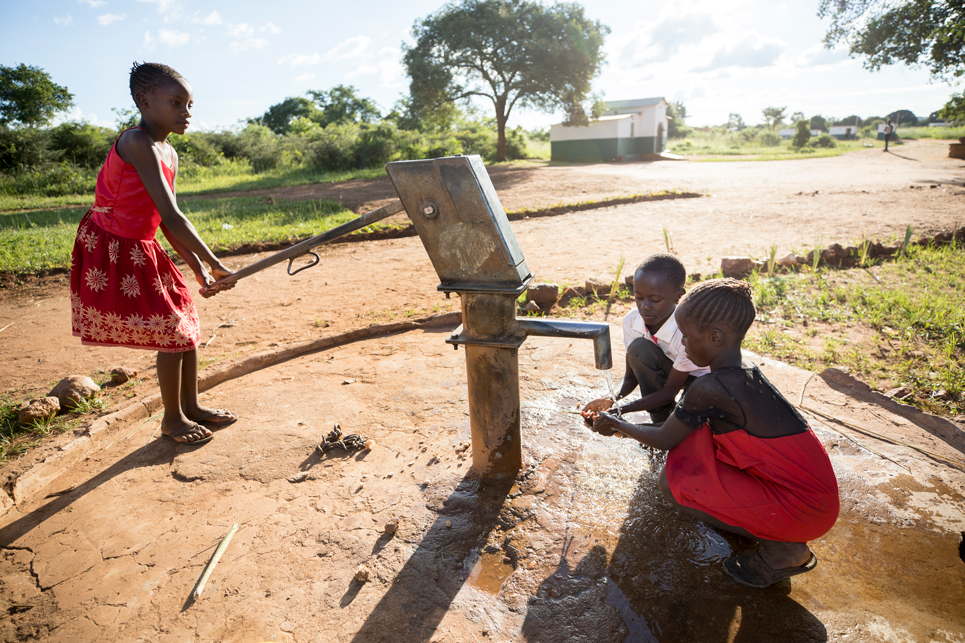 Joshua, 9, with his sister Brenda, 7, and their neighbour, Brenda, 9 (right), using the hand pump installed by ChildFund at their school. Photo: Jake Lyell

How hand pump wells save lives in rural communities