Building back better after the Nepal earthquake

Following the devastating 7.8-magnitude earthquake that rocked Nepal on 25 April, 2015 ChildFund Nepal implemented an emergency response project to provide urgent relief to families in need and help rebuild their communities.

Almost overnight the earthquake left millions of people homeless with no reliable sources of food or water.

Among the worst-hit districts was Sindhupalchowk, where more than 3,000 people died. Thousands more were injured by falling debris caused by the quake or aftershocks, which included one measuring 7.3 on 12 May.

The earthquakes were the worst Nepal had seen in 80 years.

In total more than 8,700 people died, and more than 22,000 others were injured. Hundreds of thousands of homes were destroyed or damaged.

ChildFund’s response project, which ran for 2½ years, ensured children and their families in the Sindhupalchowk and Ramechhap districts received emergency aid in the immediate aftermath of the quakes, as well as ongoing support.

Another key focus was to restore sense of normalcy and safety for children by rebuilding schools and creating safe spaces where they could learn and play.

In the weeks after the earthquakes, ChildFund staff overcame fuel shortages, ongoing aftershocks and the threat of landslides to ensure children received the help they needed.

Food baskets including rice, dhal, salt and cooking oil were delivered to more than 3,000 families (12,000 people), and tarpaulins and groundsheets were provided to set up temporary shelters to weather the monsoon.

Child-centred spaces provided children a safe refuge where they could play, learn and receive trauma support. This intervention was crucial for child protection as schools had yet reopened.
Apsara Khadka, head teacher at BS Dhuskaun, one of the affected schools, said the spaces helped alleviate children’s fears following the quakes.

“At home all the children were scared,” she says. “At the child-centred space in our school, children got a chance to sit and talk with their friends and hear stories together.

“They played Nepali drums, sang songs, and performed dance … They were happy.”

After immediate needs were met ChildFund began working towards returning children’s lives to normal, by supporting schools so they could reopen.

Sanwar Ali, senior adviser of ChildFund Australia’s emergency response programs, said it was important for ChildFund to continue its work beyond providing immediate aid to ensure children and their communities were better off in the long term.

“Our projects in the last 2½ years supported families to cope with and survive the immediate aftermath of the disaster, helped them rebuild their lives and bounce back from the adverse situation,” he says.

“The vulnerable communities in Nepal are now better prepared because of our long-term recovery and rehabilitation and disaster risk reduction work.” 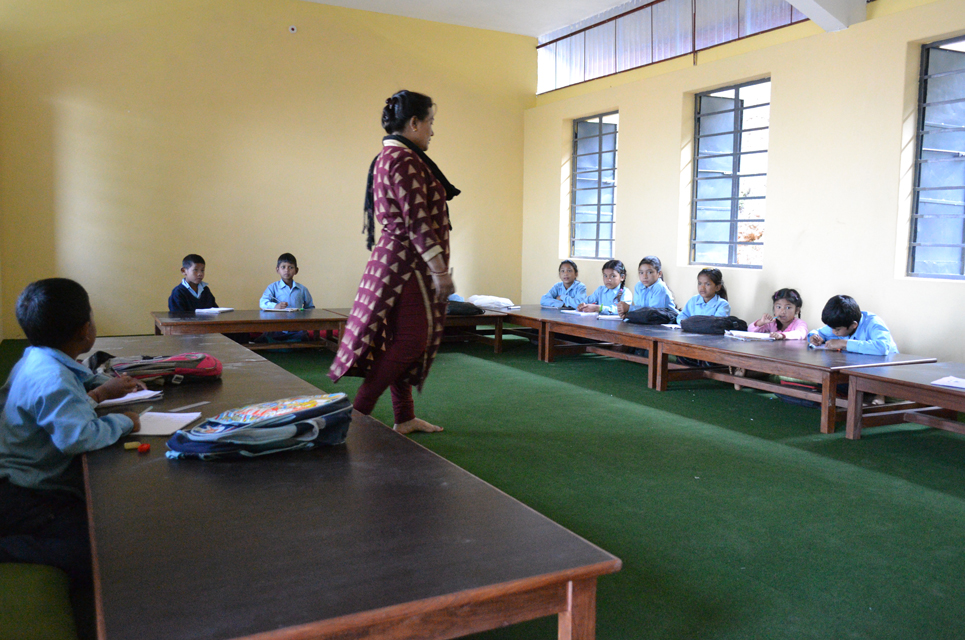 Temporary learning spaces were constructed and school water and toilet facilities were repaired in the Sindhupalchowk and Ramechhap districts.

Educational materials for teachers and children were provided to encourage children to return to school. In December, to cope with cold winter weather, classrooms were insulated and warm clothes were provided to students.

Training sessions were held for teachers and community leaders on topics such as disaster risk reduction, education in emergencies, psychosocial counselling, and child protection.
In June 2016 ChildFund started renovated and constructing earthquake-resistant school buildings including new toilets and water facilities.

By the end of our response project in September 2017, 75 classrooms in 14 schools had been built or renovated, benefiting more than 1,800 students.

In addition to a focus on education, we also provided livelihood support to poor families. Twenty families in Tauthali, Sindhupalchowk were provided with five goats each and other support services as part of an income generation program to support the holistic development of their children.

You can help provide essential support to children affected by emergencies. Donate now.