Cyclone Pam: one year on

On 13 March 2015, Tropical Cyclone Pam raged through the Southern Pacific Ocean and became one of the worst natural disasters in the history of Vanuatu. With wind gusts reaching 320 km/h, more than 20 people were killed, tens of thousands were left homeless, schools were destroyed and family livelihoods wiped out.

One year on, and most of the infrastructure has been repaired or rebuilt in the Pacific Island nation, thanks in part to the emergency assistance provided to communities by ChildFund Australia and our partner on the ground, Live & Learn Vanuatu. Yet the scars of Pam remain.

“Although Ni-Vanuatu people have demonstrated great resilience, there are still several issues to be addressed,” says Anze Simnovec, project coordinator for ChildFund’s partnership project in Vanuatu. “Cyclone Pam has negatively impacted almost every aspect of people`s lives,” he explains. “People were not just struggling with the rebuilding of their homes, food and water shortages, but also with the psychological scars that the cyclone has left.”

“Moreover, because people spent most of their little savings on the rebuilding of their homes, they were struggling with other things such as paying for school fees, kindergarten fees and health services.”

Enabling children to resume their education was a priority of ChildFund`s response effort in Vanuatu. To date, ChildFund has supported the reconstruction of two kindergartens in the informal settlement areas outside the capital Port Vila, giving 70 pre-school children the chance to return to school. Constructed to be cyclone-proof and with wheelchair-friendly ramps, these buildings can now be used as emergency shelters for the local community during cyclone season, which typically occurs from November to April. 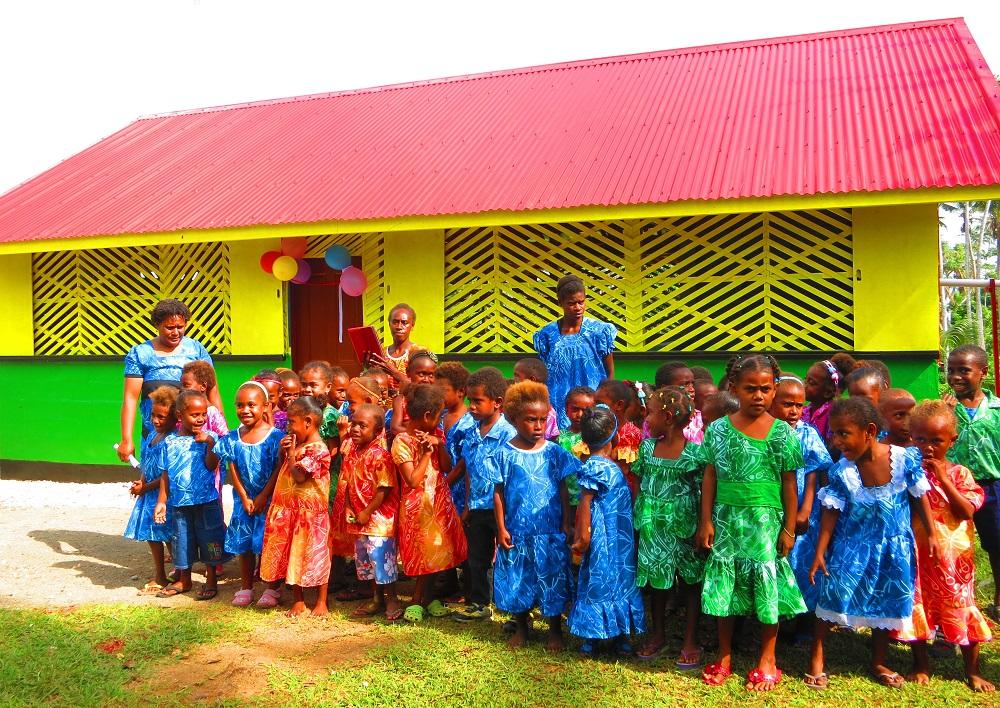 Children in front of the newly constructed classrooms

With Cyclone Pam decimating much of Vanuatu’s fruit crops, Anze explains a shortage of fresh fruit remains a huge issue. Fresh fruit now comes at a high price, with fruits from the unaffected northern regions being shipped down and sold for up to triple the average cost.

Anze notes a less-nutritious diet of imported rice, tinned tuna and tinned meat has become the staple: “Many people from rural areas whose main source of income was selling fruit and vegetables, the majority of which was spent on school and kindy fees, still have not recovered completely.”

Exacerbating the situation is the occurrence of El Nino, which has led to less rainfall than usual in Vanuatu over the past six months, causing critically low water levels and leaving the soil too dry to plant vegetables.

Schools have also taken a hit by El Nino, with opening hours and classes cut back, notes Anze: “Many of the schools and kindergartens could not operate normally, because there was not sufficient water for all students to stay properly hydrated.”

Still, hope is blossoming among the devastation. Celina, one of the kindergarten principals, says she’s seen a substantial growth in attendance rates since her new local kindergarten was built. Despite water shortages due to El Nino, “Water catchment, together with the 6000L water tank that has been installed by Live & Learn through the ChildFund project, was crucial in securing water when the wells dried up,” she says. “With the support, we’ve also managed to build a brand-new compost toilet for the kindy kids.”

These changes have made a big impact on kindergarten student Bennie. “The new kindy is so nice and so big!” he notes. “We have much more space than before, new chairs, new desks and we can also hang our school bags outside of the kindy. I love it.”

In the wake of Pam, water filtration kits were distributed by ChildFund and Live & Learn Vanuatu to 15 schools and four kindergartens, giving more than 3,500 students access to safe drinking water for the next 20 to 30 years. Teachers from three schools have undertaken first-aid training, plus workshops for all community members have taken place to raise awareness about El Nino, climate change, sanitation and nutrition. Chicken houses and roosters were also provided to three schools to help them generate extra income and long-term funding.

Restoring livelihoods has been another priority to help families get back on their feet in the wake of Pam’s agricultural devastation. In total, 100 families were provided with chicks, feed and seedlings to help kick-start small businesses, generating essential income for healthcare and school fees, as well as improving kids’ nutrition for their healthy development.

For Germaine, a parent, “Our family had been struggling because we had to rebuild [our] entire house. Receiving vegetable seedlings, together with chickens, raising them up and selling them helped us to get some extra money that we could invest,” he explains. Plus, “Doing some community work and getting one semester of kindy fees paid for was also a blessing.”

As Vanuatu prepares to mark 12 months since Cyclone Pam, Anze still sees damaged houses and schools throughout Port Vila, particularly in the rural areas, where tarpaulins are used to cover the roofs of some homes. Still, “People are cheerful and optimistic,” he says. “They are very happy and grateful for all the support they have received in the last year.”

For school principal Celina, “This has been a challenging, but magnificent, year. I do not know what would have happened with the kindy, with the children, if your help had not come,” she says. “A great tragedy has turned out to be a blessing for us.”