Meeting families at the heart of the drought in Kenya

ChildFund International CEO Anne Lynam Goddard travelled to Kenya last week to see first-hand the impact of the drought, which has left more than 3.5 million people in need of emergency food aid. Anne visited one of the most affected areas, the Turkana region, where ChildFund is responding.

It’s a dusty and bumpy drive to Lokitaung in northern Kenya. You can taste the dust in the air. It’s early in the morning and already the heat is unbearable. Without water, nothing grows in this hostile environment.

We stop at a health tent. “Thirty-seven percent of children under five are malnourished here,” a local nurse tells me as she weighs a young girl. “Eight percent are severely malnourished. That’s a sharp increase compared to last year.”

In times of food shortage, children under five are the most vulnerable to malnutrition. Inadequate food intake in young children has lifelong growth and development implications. That’s why ChildFund is focusing its relief efforts on providing food to those aged five and younger, as well as pregnant and nursing mothers. We are using existing structures we have in place on the ground, including health facilities and early child care and development (ECCD) centres, to deliver food and water. 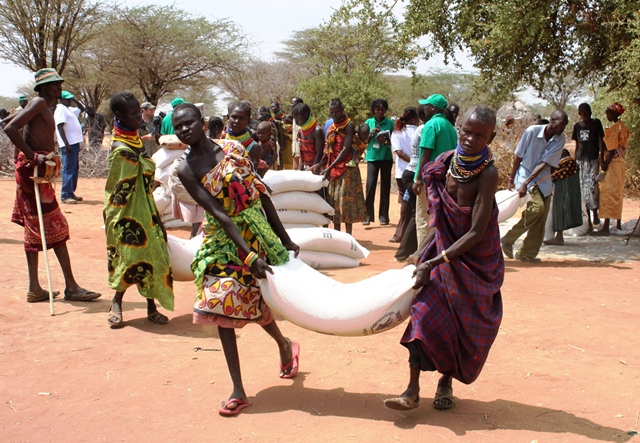 Mothers I speak to complain about eye irritations because of the dry and dusty conditions. Children are coughing. Today, we’re also testing mothers for HIV. Thankfully, all have tested negative.

In the afternoon, we visit the remote village of Kariburi. The road is even bumpier and dustier than the one we travelled this morning. Everywhere you look is the same landscape: dust fields. We drive through one dry riverbed after another. Turkana really is the epicentre of the drought in Kenya. 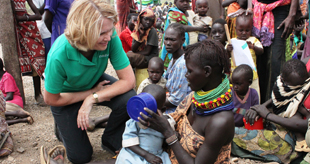 ChildFund has also trucked in drinking water. A large crowd has gathered around the tap. Women have brought their containers to carry water back to their homes. ChildFund is also providing training on hygiene and sanitation practices. It’s in times of food shortage that people become weak and more vulnerable to disease outbreak.