Youth step up and speak out at Lao Children’s Forum

Before joining ChildFund in Laos activities, 16-year-old Xaykham from Khoun District, Xiengkhouang Province had never heard of a children’s forum.

“I never knew there were activities where children could share their thoughts and opinions,” he said.

Traditionally, children’s voices in Laos have not been given serious attention, particularly in the public sphere of decision-making. That’s what makes opportunities such as the National Children’s Forum, an annual event co-hosted by ChildFund in Laos and the National Commission for the Advancement of Women and Mothers-Children (NCAWMC), so vital.

Xaykham has been lucky enough to participate in two such events in recent years. In addition to this year’s Children’s Forum, he was also able to join a 2019 event commemorating 30 years since the United Nation’s Convention on the Rights of the Child. At the event child representatives from all the Lao provinces had an opportunity to meet and bring their concerns on issues affecting them to stakeholders at the national level.

But Xaykham (pictured above at the 2020 Lao Children’s Forum) is in the minority.

Xaykham said it was particularly important for children in places like his home province of Xiengkhouang to be able to participate in activities such as the Children’s Forum. In his area, he said, there were few opportunities where children could demonstrate their abilities. There might be some chances for children to show their talents in sports or singing, but as for providing their thoughts and opinions, or speaking out, there were not really any platforms.

When he heard about the Children’s Forum, which is now in its third year in Laos, Xaykham was enthusiastic to participate. “I wanted to have the chance to speak as a youth representative,” he said. “In my community, most children still lack opportunities. I wanted to speak out to represent youth in my district and to tell adult leaders and authorities about the problems children in my community are facing.”

Stepping out of comfort zones

Xaykham was not the only one making the most of his time at the forum. Sixteen-year-old Namfonh, who is from Vientiane Capital and was the MC at the forum, was attending the event for the first time after hearing about it through a peer at her school who was part of ChildFund’s Ready for Life project.

“Since the forum, I have wanted to have new experiences and open opportunities for myself, to do things I’ve never done before,” Namfonh said.

Namfonh and Xaykham are both taking part in ChildFund’s Ready for Life project, which aims to empower young people through developing their decision-making, critical thinking and life skills, and increasing their opportunities to participate in change, and voice their opinions, in their communities.

“Before joining the Ready for Life project, I was shy and didn’t dare to speak out,” Xaykham said. “It was something I never had the chance to do. There were some times that I did have the chance, but I didn’t dare to take it.

Namfonh had a similar experience. “When my teachers used to ask questions, I would know the answer, but I wouldn’t dare to say it.” She smiled as she thought of how shy and fearful she had been in the past. “Even if it was just my friends inviting me to go out with them, I wouldn’t dare to go!” 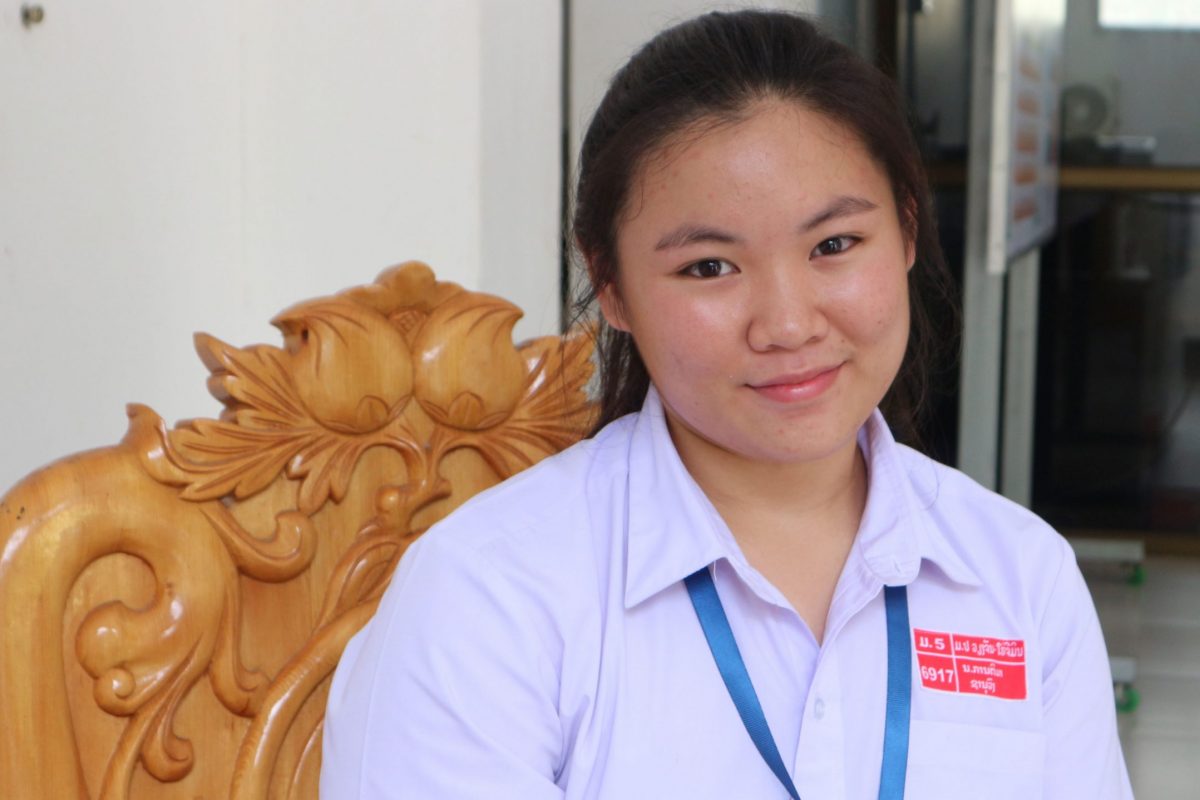 Sixteen-year-old Namfonh, who attended this year’s Children’s Forum in Laos, hopes that in the future all children and young people will have the skills and opportunities to speak out and participate in the development of their communities.

As they spent more times in ChildFund’s Ready for Life activities, practising speaking out, both children started gaining confidence.

“I may have already had the ability or the knowledge to speak in a forum or participate in these kinds of activities, but it was after joining ChildFund’s activities that I could develop these abilities and learn to use them,” Xaykham said.

Xaykham and Namfonh agreed that the best part of the Children’s Forum was getting to meet and learn from other passionate young people from different schools and places.

“The thing I liked most was learning from the experiences and challenges youth in other provinces face, and what solutions they have for addressing these problems,” Xaykham said.

Namfonh shared this same eagerness to learn from children from different backgrounds. “There were probably 100 people there, and everyone’s thinking was different from our own,” she said.

In particular, both children emphasised the differences between youth from urban Vientiane and the other two more rural provinces participating in the forum, and both saw this as a learning opportunity rather than a barrier.

Xaykham said he learnt that children in Vientiane tended to have more access to information and knowledge on topics such as nutrition than youth in rural areas. They, however, seemed to have limited knowledge about child poverty and the issue of disadvantage that many rural children face.

Namfonh affirmed that even young people in urban areas like Vientiane with better access to information still had much to learn from their rural counterparts. “City kids have one kind of thought, and children from rural areas might think differently from us,” she said. “We need to have the chance for them to voice their ideas so that we can learn from each other.”

The differences between Vientiane and rural provinces also came out when the participants considered what they felt was the biggest issue facing youth in their communities.

Namfonh named social media as the key challenge facing young people in her community. “Learning using technology can be a good way for us to learn new things, but most young people use it in a way that isn’t useful, such as playing on their phones while they should be studying,” Namfonh said.  She admitted that the issues were likely not the same in other communities in Laos. “I think in rural areas, the problem is more about having access to technology in the first place.”

When asked about the priorities in his community, Xaykham talked about parents and youth not prioritising education, and more generally gaps in communication between parents and children. “One of the major problems in my district is youth not being interested in education,” he said. “Because maybe parents leave it to their children whether or not to stay in school, and some parents aren’t dedicated.”

Hope for the future

Despite the challenges these two young people see in their communities, both of them are hopeful about the future of Lao children.

“In the future, children will dare to speak out, share their ideas, and participate in society,” Namfonh said. “They’ll be able to access quality information, and will have skills and show their capacities in their daily lives.”

Namfonh said while children needed to actively take part in opportunities like the Children’s Forum, they also needed to keep pushing for change in their communities and for more opportunities to have their opinions and ideas heard.

“Experience is something we have to go after and pursue,” Namfonh said. “It isn’t just going to come to us; we have to walk towards it.”