Russell and his wife Ursula had been to Vietnam before but in late 2019 they made a special trip to the country, which led them to helping a school in a remote village.

The couple from Victoria were visiting their sponsored child, 10-year-old Yen, for the first time. They had been sponsoring Yen for six years and had regularly written letters to her through ChildFund’s sponsorship program, but wanted to meet Yen and see for themselves what her life was like.

“We had always planned to visit her because it makes it more real,” Russell says.

“It was very exciting to meet Yen. It was a very nice experience. Her parents were delightful and Yen was delightful – a little shy at first, but after a little while she opened up.”

Russell and Ursula met Yen and her family at Yen’s school, where they were taken aback by the number of students.

“I was a bit surprised that the school had so many children – there were about 500 children – in such a remote place,” Russell says. “It was a big school for a place that was so remote.”

The school was in “good nick”, but Russell and Ursula noticed that the computer room was lacking in resources. “I think they had six or seven computers for a class in the entire school,” Russell says. “Given the children’s economic circumstances, I imagined they wouldn’t have computers at home.”

After returning home to Australia, the couple decided to donate eight computers to Yen’s school. 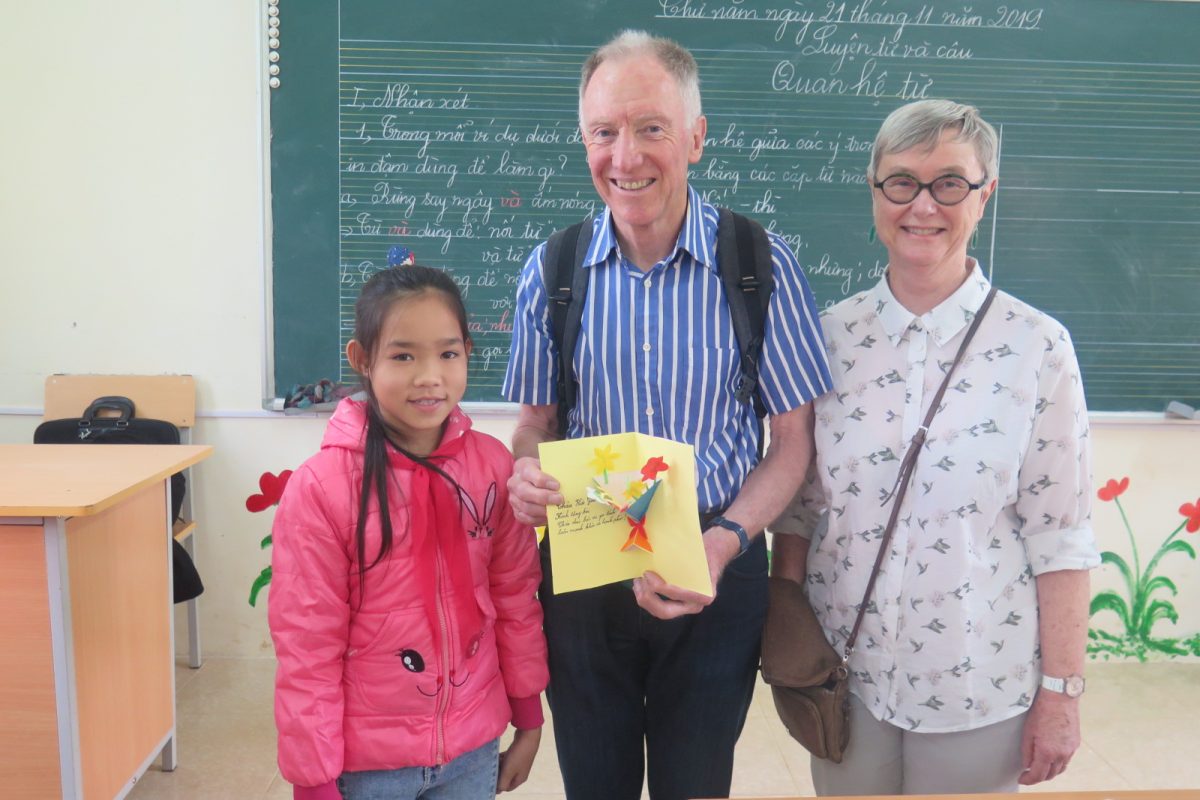 Russell says visiting Yen has “brought the sponsorship to life”. “I would like Yen, in the future, to have the opportunity to expand her horizons, to see other places and perhaps if she so desires to continue her education at university,” he says.

“We found out from ChildFund Vietnam’s Country Director how much it would cost and then we made a decision,” Russell says. “For us it was a modest cost, but for the students it’s a big advantage.”

Yen says that up to four students would share a computer before Russell and Ursula’s donation.  “Thanks to the new computers, I have more opportunities to practise on the computer as I only need to share it with one of my classmates,” she says.

“Thank you for giving us these new computers.”

Yen enjoying the new computers donated by Russell and Ursula. “Thanks to the new computers, I have more opportunities to practise on the computer as I only need to share it with one of my classmates,” she says.

Russell says a sponsor visit is an “absolute must” for anyone thinking about visiting their sponsored child. “It just brings the sponsorship to life,” he says. “We learnt a lot of about the wonderful work that ChildFund is doing and we would recommend it as a professional organisation and a perfect choice for sponsorship.”

He says the best part about being a sponsor is “feeling like we’re making a difference”.

“I would like Yen, in the future, to have the opportunity to expand her horizons, to see other places and perhaps if she so desires to continue her education at university,” Russell says.