Every child should have the right to play

Growing up in Australia, playing sport was a given, although I never dreamed that I would end up a professional athlete, and especially not a rugby union player.

Having the opportunity to take part in organised sport is not something that is available to all children as I recently saw first hand during a trip to Laos with ChildFund.

In Nonghet Province, in the country’s north, sporting facilities are few and far between. This is a region that is also still recovering from the Vietnam war, with high levels of unexploded ordnance contamination making large areas of land unsafe.

The ChildFund Pass It Back rugby for development program is giving many young people here the opportunity to take part in tag rugby. It’s often the first time they’ve had the chance to play organised sport. Not only is this rugby for good program giving vulnerable children from developing communities to chance to play, but its unique curriculum also teaches young players about planning for the future, teamwork and gender equality.

The sheer joy on the kids’ faces in Laos was infectious. It really is a universal truth that every child loves to play! I was so touched to see how much these children treasure their involvement in rugby and embrace every minute on the field and with their teammates.

What’s most impressive about ChildFund Pass It Back is the fact that over 50 per cent of the participants are girls and young women. Because it’s such a new sport in Laos, there are no pre-conceptions that it’s only a game for the boys. 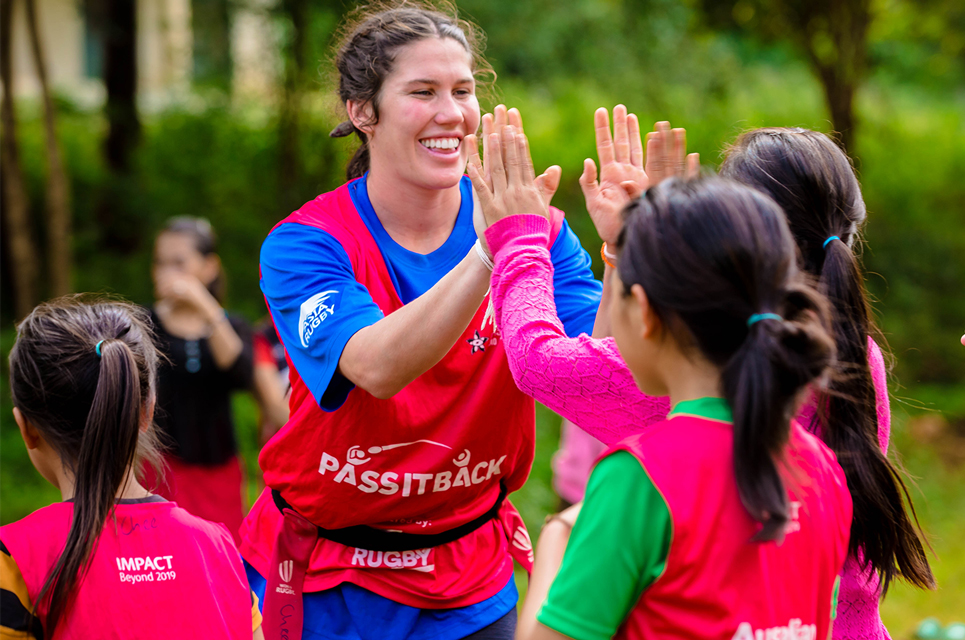 There’s a clear sense from the coaches and players that everyone is equal, on and off the field. For girls in particular, the game boosts their confidence and inspires leadership, which can make a real difference over the course of their lives.

It’s the same here in Australia and I’m proud to be a part of the changing perceptions about who can and should play rugby. Rugby has made a massive difference to my life and I want to see as many kids as possible get the chance to give it a go, regardless of their gender or what country they’re born in.

Thanks to a new partnership between ChildFund and World Rugby for Rugby World Cup 2019, over 20,000 thousand children from disadvantaged backgrounds across Asia will have the opportunity to benefit from the transformative power of sport.

It will mean that ChildFund Pass It Back can be expanded in Laos, Vietnam and the Philippines, and established in other developing countries in the region.

I’m proud to see the international rugby community getting behind such a good cause. I visited Laos to share my rugby skills and knowledge, but it was also such an important learning experience for me. I now have a much deeper understanding of the way rugby, and sport in general, can make a difference to children’s lives.

Like everyone at ChildFund, I believe that every child has the right to play, learn and grow.

To know that something I love so much can help so many people is incredibly rewarding.