Former sponsor inspires Francis to give back to his community

Francis Mwanu says his former sponsor’s compassion and dedicated support has inspired him to give back to the community in which he grew up.

A few times throughout the year, Francis, who lives and works in Kenya’s capital Nairobi, returns to his home region of Nakuru, about 160 kilometres northwest of Nairobi, bringing clothes and food to children in need.

“Visiting the children – even it’s just for a day – makes them feel good,” Francis says.

“Sometimes we help the communities there raise money to fix things like their water tank.”

When he was three years old Francis was sponsored by Australian Dave Meney through ChildFund’s sponsorship program in Nakuru.

Francis’ job importing goods had come to a sudden halt in 2017 when Dave jumped in and offered him job.

“Seeing and knowing all that Dave and his family have done for me, it has inspired me to visit children’s homes in Nakuru,” Francis says. 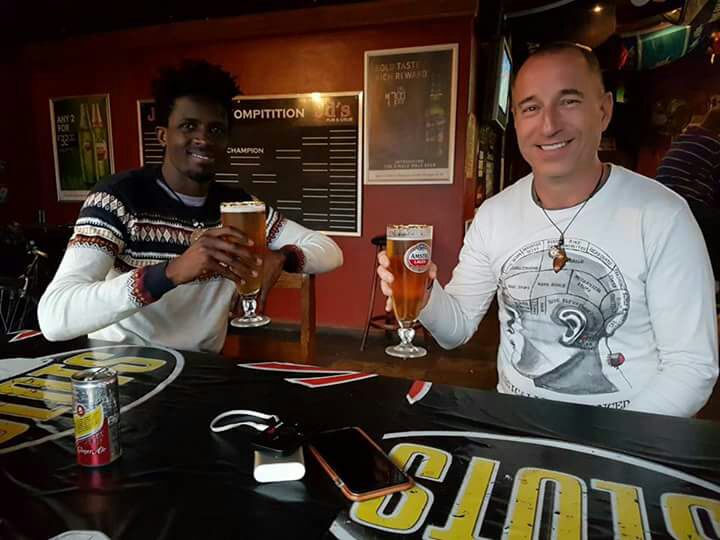 Francis and Dave’s friendship grew after they shared a trip through South Africa in 2017.

Most of Francis’ memories of childhood are filled with fun and joy. He fondly remembers swimming in dams, making footballs out of compressed plastic bags, and learning to ride his first bike.

Today he is still good mates with many of his childhood friends. But it’s the friendship he’s had with his former sponsor Dave that has been one of the most inspiring and empowering. The pair have known each other for about 26 years, writing letters for half of that time as part of ChildFund’s sponsorship program and then later reconnecting on social media.

Francis says he’s grateful to have Dave and his family in his life.

“They are like family; they have known me since I was young, since before I even knew who I was,” he says.

Francis says his new role at Yenem has given him the opportunity to chase his dream of becoming an engineer and support his mother at the same time.

“My mum hasn’t moved from where we used to live. I’m working so I can elevate her living standards and see if we can move her to somewhere else,” he says.

As far as Francis is concerned, he’s on the right track.

“I never complain about my own life,” he says. “I always appreciate life because I know there are others who don’t have what I have.

“When I see that I am helping to transform the lives of people around me, like my mum, that makes me feel good.”