At ChildFund we believe all children should grow up feeling cared for, encouraged and valued, no matter where they live.

Every child should explore, learn and thrive, and be able to reach their potential.

Unfortunately, many children around the world grow up in an environment of fear, unable to have the childhood they need. Millions of children are forced to work in dangerous conditions when they should be learning and growing in the safety of a classroom.

The COVID-19 pandemic threatens to force more children into the workforce, with the economic impact adding further pressure to the household income of vulnerable families.

Many children work in agriculture, construction and other hazardous jobs

Of the 152 million children working, 73 million are in hazardous jobs. Agriculture, construction and manufacturing are some of the main industries employing children. In these industries children can be exposed to toxic chemicals, expected to operate dangerous machinery, and expected to work long hours and risk abuse.

When children work they often have to drop out of school, or their education suffers as a result of the additional responsibilities they have outside of school.

“In my life, I am happiest when I go to school, and see my classmates having fun,” said Phhuong, from Cambodia who dropped out of school in Grade 6 to help her younger brother continue his education.

“When I see my friends going to school, I feel very regretful. “I am not able to meet them any more. We used to play together.”

A report by the International Labor Organisation in 2015 found that in some countries working children were half as likely to attend school as children who were not working.

Without an education, or with a limited education, children are more likely to end up low-paid jobs which decreases their chances to escape poverty.

In the world’s poorest countries, one in four children is a child labourer.

In many cases, the eldest child in the family is the most vulnerable to child labour. As soon as they are old enough to work, they are expected to help provide for their younger siblings.

Sometimes children will be forced to work if one of their parents is unable to work. This is what happened to Arum’s daughter Mony, who is 13 years old and working in a dangerous brick factory after he mother was injured at work.

“I don’t want my kids uneducated like me,” Arun said. “I want them to study so they’re able to find better jobs.

“But I didn’t know what to do when my wife could not help me out on family income.”

Almost half of all child labourers are younger than 11 years old. In most regions, girls and boys are equally likely to be engaged in child labour.

How you can help end child labour

ChildFund believes that ending the exploitation of children is inextricably linked to our poverty reduction work.

Poverty can result in more children becoming involved in harmful labour, rendering them vulnerable to trafficking, and increasing the likelihood of girls marrying at a young age.

ChildFund works with local partners, governments and communities to prevent and respond to the exploitation of children around the world. Donate now to help give children a childhood without fear. 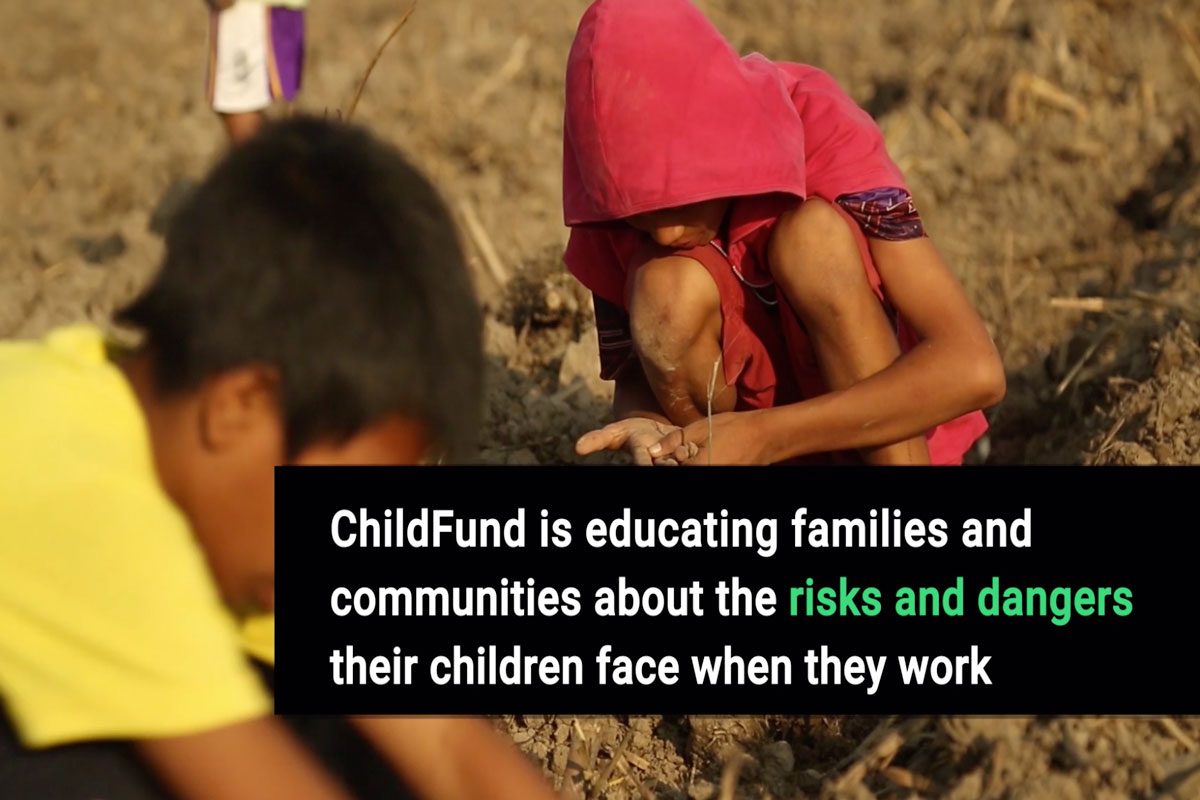 Millions of children are forced to work in dangerous conditions when they should be learning and growing in the safety of a classroom.

Engaged, connected and safe: children in the digital world