It was a chilly but beautiful morning on Bondi Beach. While the iconic Sydney eastern suburb usually teems with beachgoers, attracting a lively mix of locals and travellers, there were more runners than surfers on this particular morning.

Over just a few hours, thousands of people had descended on the beachfront as part of Sydney’s annual City2Surf fun run. There was a sense of accomplishment among the crowd, not only because they had completed the 14km course from Hyde Park, but because they had contributed to something much bigger.

About 80,000 people took part in this year’s City2Surf on 12 August, raising money to support charity.

Among the participants on the day was a team of eight, sporting big smiles and bright green T-shirts.

For the past five years, Melissa Rhodes-Smith (pictured above, far left) and her family and friends have taken part in the City2Surf to raise money for ChildFund.

Last year three generations of the Rhodes family participated in the event, and this year was no different.

“Doing the City2Surf as a family is just so great, especially having the kids come along,” Melissa says. “Seeing them with the grandpas on the walk is such a pleasure.

“It is a really good chance to spend some nice, quality time together.”

For Melissa’s son Elliot, this year’s City2Surf was his first. He finished the event triumphantly, alongside his older brother Marshall, 10, and second cousin Nash, 11.

“Each year we seem to get an extra family member join us!” Melissa says. “Elliot is only eight, so I was really proud of him.” 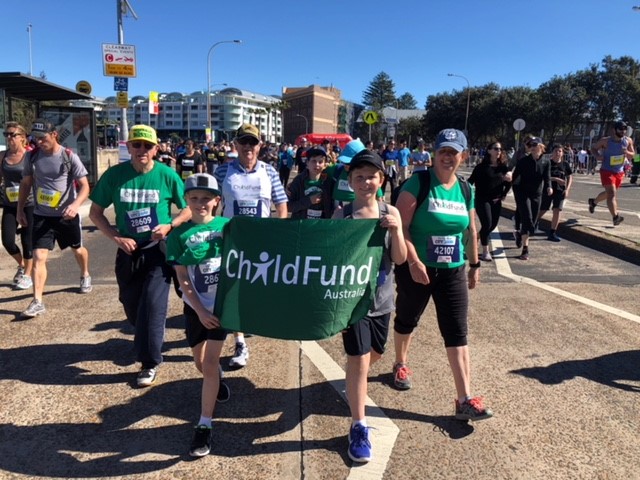 The Rhodes family take off for their fifth City2Surf supporting ChildFund.

For the Rhodes family, fundraising for ChildFund has been a healing experience.

“We experienced a devastating tragedy when we lost my brother Gavin and his family several years ago, and we were able to channel our grief into raising money for ChildFund and helping the beautiful village of Pha-En in northern Laos,” Melissa says.

“The support we have received from our family and friends who feel the same way we do, has been very comforting and helped us through a very difficult time.”

For Melissa’s sons Elliot and Marshall, being a part of the fundraising activities has also helped broaden their understanding of others around the world.

“I think it is so great for Elliot and Marshall to see how they can help children who are not as fortunate as they are,” Melissa says. “It is wonderful for them to see how generous people are. And that it isn’t hard for them to take time out of their lives to try and help others, and for them to feel what a rewarding experience this is as well.”

Over the years, the Rhodes family and their friends have fundraised to build a preschool and community meeting hall in Pha-En village, in memory of Gavin and his family.

The preschool – the first of its kind in the remote village to provide early education to children – was built in 2015 and the community hall was completed this year.

The meeting hall will provide the village with a place for community leaders to discuss key community issues and solutions. It will also be used to carry out sanitation and hygiene training, teacher training, disaster risk reduction planning, and youth group meetings.

“We get a lot of support from our friends and family who donate to our fundraising pages,” Melissa says. “They all say they love that they know where their donations are going. This is why we have been so happy with our ongoing relationship with ChildFund; we are able to show people where their money is going, who it is helping. We get a lot of positive feedback on this.”

ChildFund would like to thank the Rhodes family and their friends for all their support over the years.