A tragedy behind closed doors

Millions of children across the Pacific are experiencing high levels of domestic violence, including in Papua New Guinea and the Solomon Islands. For the vast majority of children, this violence is happening in a place where they should feel safest: their homes and communities.

The following story contains content that may be distressing for some readers.

Elizabeth* is four years old but she already bears the painful scars of abuse that far too many people experience in life.

Elizabeth is from a poor community in Papua New Guinea, where domestic violence – mainly against women and children – is common in families and households. For months, Elizabeth, was physically abused by one of the people who should have loved her most – her father.

Elizabeth had been left in the care of her father when her mother needed to move far away for work.
It was about a year after Elizabeth had moved in with her father when her aunt, Maggie*, discovered the abuse. Elizabeth’s father had sent images of the abuse to Elizabeth’s mother, threatening to kill her and Elizabeth.
Maggie* was terrified for Elizabeth’s life. She had learnt about a phone counselling service for survivors of violence, the 1-Tok Kaunselin Helpim Lain, through a text message campaign, and called the helpline.
Maggie shared her story and fears with a helpline counsellor, who provided her with support and reported Elizabeth’s case to police, and welfare and child protection services.
The counsellor helped Maggie access emergency funds so that Elizabeth could be removed from her father as soon as possible and move into a safe place with Maggie.

Today, Elizabeth is living with her mother again. Elizabeth’s father has been charged, and Elizabeth and her mother have protection orders in place.

Maggie has been in touch with the helpline counsellors, providing them with updates on Elizabeth’s wellbeing. She said Elizabeth and her mother were both safe and living at peace. All this would not have been possible, Maggie said, without the support of the counsellors and emergency funds that were secured through the 1-Tok Kaunselin Helpim Lain service.

*Names have been changed to protect individuals’ identities.

‘Our mothers, sisters, daughters and wives are suffering from a weak protection system’

Millions of children like Elizabeth across the Pacific, including Papua New Guinea and the Solomon Islands, where ChildFund works, are experiencing high levels of domestic violence including physical, emotional and sexual abuse, as well as neglect. For the vast majority of children, this violence is happening in a place where they should feel safest: their homes and communities.

With the COVID-19 pandemic, reports of domestic violence increased around the world along with social isolation, unemployment and alcohol use.

In Papua New Guinea, more than 2 in 3 women and girls experience some form of physical or sexual violence in their lifetime.

Ivodia Malio, a Senior Counsellor with the 1-Tok Kaunselin Helpim Lain, said the rates of violence in Papua New Guinea were “concerning”.

“There is a great need for family and sexual violence services to work together to develop better strategies to address the high rates of violence in the country,” she said.

“The 1-Tok Kaunselin Helpim Lain is doing great work to assist vulnerable women and children to be safe. Perpetrators are also calling the helpline for support to change their abusive and violent behaviours.” 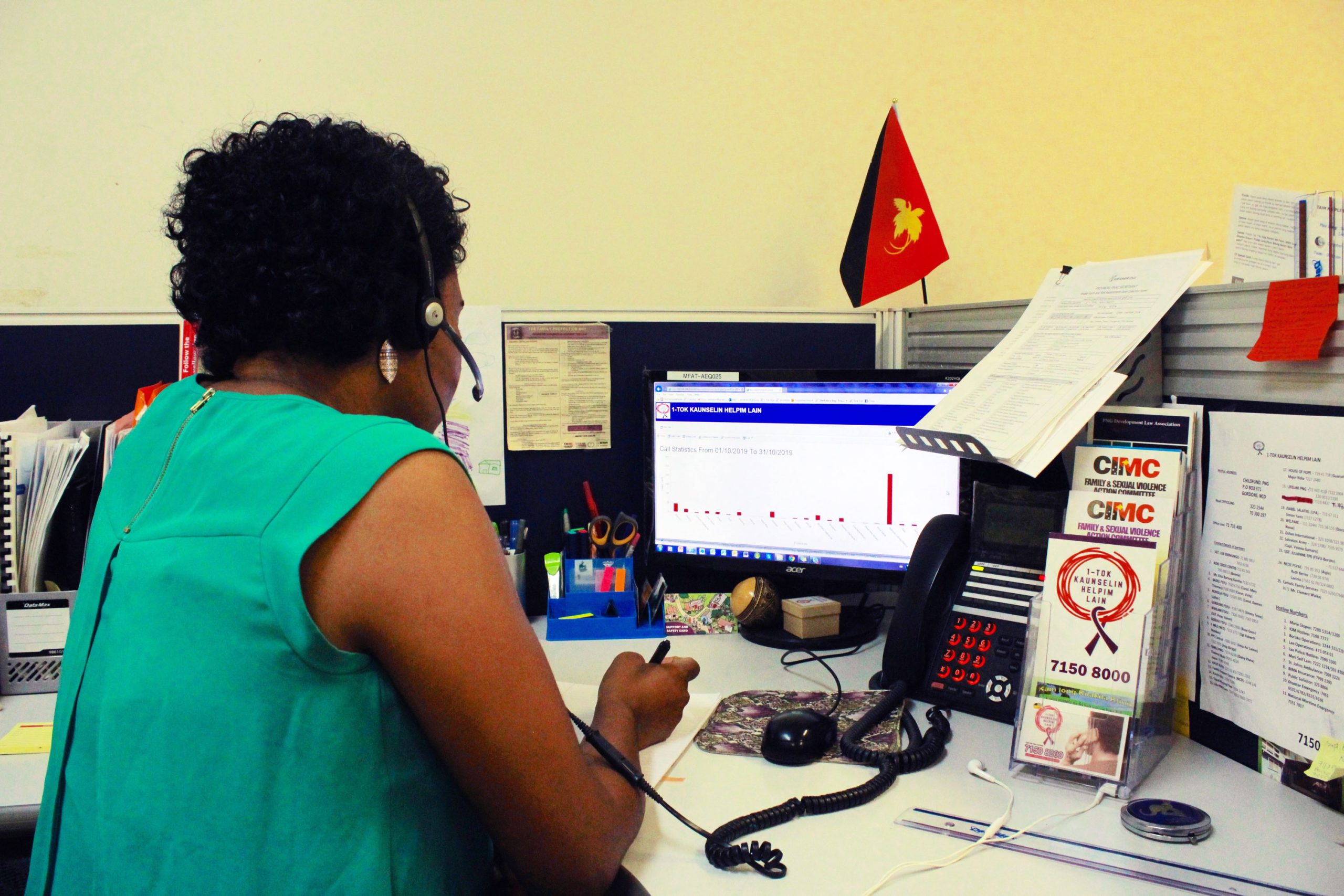 The 1-Tok Kaunselin Helpim Lain is the first toll-free helpline for survivors and perpetrators of violence in PNG. It was established in 2015 by ChildFund and local partners in response to PNG’s high rates of violence.
Helpline counsellors have received more than 50,000 calls since the service was launched in 2015. The success of the helpline has led to ChildFund supporting a similar crisis counselling service in the Solomon Islands.

In the Solomon Islands, 2 in 3 women between the ages of 15 and 49 have experienced physical and/or sexual violence by an intimate partner. More than a third of these women experienced sexual abuse as a child.

The success of the 1-Tok Kaunselin Helpim Lain service in Papua New Guinea has led to ChildFund supporting a similar crisis helpline in the Solomon Islands.

How your donation can protect children from domestic violence

Ensuring children are safe and free from domestic violence is a collaborative effort between development organisations such as ChildFund, and children, their communities, and local governments.

With your help, vulnerable children and their families can access the immediate and long-term support they need to be safe. ChildFund is working with local partners to provide not only services such as crisis counselling and referrals to safe houses, we are also working with governments and communities to strengthen child protection systems. Your donation will also help educate and empower young people to raise awareness and lead advocacy activities in their communities that focus on peace promotion, conflict prevention, and respectful relationships.

Youth Peace & Protection Champions: Educate and empower young people to raise awareness and lead advocacy activities in their communities that focus on preventing and resolving conflicts peacefully, prevention of violence, and respectful relationships.

You can help stop violence against children.

The rapid advance in digital technology is changing childhoods around the globe, with research showing that around one in three internet users is under the age of 18.

Last week the United Nations Children’s Committee recognised that the rights of young people apply online as well as offline. This is a welcome and important development in child rights.

Online connectivity can have many benefits for young people. It brings access to information and knowledge. It offers an environment in which to build peer connections and social networks, at home and around the world.

For children seeking support, the online world can provide guidance, and advice. And, as we have witnessed during the pandemic, online education resources can provide a valuable alternative learning platform when face-to-face classes are unavailable.

When accompanied by low levels of media literacy, however, access to the worldwide web can also present new threats to children’s safety. Without the knowledge and skills needed to navigate the digital world, young people’s exposure to potential abuse and exploitation increases.

In Vietnam, internet penetration is now at 70%, with almost 70 million people online. This includes 65 million social media users. It is estimated that in the country, more than one-third of Facebook accounts belong to young people, aged between 15 and 24.

This project will enter its second phase in Vietnam, and is currently being implemented in the Solomon Islands, Cambodia, and Myanmar with plans to expand this initiative in the Pacific.

Recently, ChildFund Australia, Plan International Australia and the Young & Resilient Research Centre of Western Sydney University launched a new study – Online Safety in the Pacific – in order to fill the research gap and map the challenges and opportunities for children in the Solomon Islands, Kiribati and Papua New Guinea.

Among the children surveyed, 77% said the risk of accessing inappropriate content, such as horror movies and pornography, was their greatest fear, followed by cyber-bullying (38%).

Parents and carers also identified a lack of control over what children were accessing as their greatest concern.

Swipe Safe training workshops assists young people to understand the risks of using the internet, and how they can better protect themselves.

The program aims to empower young people to make the most of the digital world and provides valuable information about online safety to parents and teachers.

Fifteen-year-old Ngoc created her Facebook account when she was in Grade 6. She found that on Facebook she was able to make many new “friends” from around the world.

The number of people she connected with reached the thousands. “I did not know most of the people on my friend list in real life,” Ngoc says.

Ngoc shared a lot of information on her Facebook page, and the time spent on social media began affecting her schoolwork. She also started to have some concerns about her online interactions.

Ngoc explains: “If we did not accept an invitation to go out from friends on Facebook, we received threats and other bad words,” Ngoc says. “We felt frightened.”

A recent survey of Swipe Safe participants in Vietnam found that, after completing the program, 100% of young people said that they knew at least one method to protect themselves when online.

In addition, 85% can identify where to go for assistance if they are experiencing any difficulties when interacting online.

CEO of ChildFund Australia Margaret Sheehan says: “The opportunities that online connectivity provides is paramount for children and young people across the Asia-Pacific.

“However, we must be vigilant in taking adequate measures to keep them safe. A single response will not combat the far-reaching risks and impacts of the online world.

“A whole of community approach, which empowers children and their families to safely navigate the online world is crucial.”